The Next Biggest Food Trend 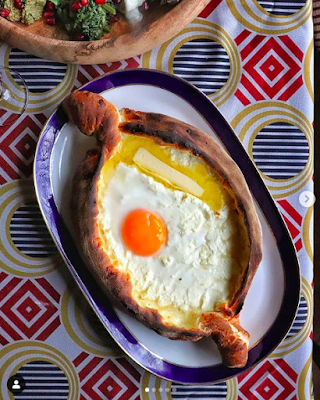 New Yorker – "The Culinary Muse of the Caucasus"

"Eventually, tapas and tempura become widely available; one no longer has to forgo a pepper mill. The April, 1977, issue of Esquire contained a three-page guide to Japanese food, entitled “Wake Up, Little Su-u-shi, Wake Up!” By that point, according to the magazine, there were almost as many Japanese restaurants in America as there were transistor radios. A kind of accelerated connoisseurship ensues. Americans of all backgrounds will eat a spicy tuna roll from the supermarket, but not without chopsticks, which we rub together, because we are lovers of sushi. It’s the thing we crave most when we’re pregnant. Before long, our stomachs start to rumble for the next big thing.

Right now, that is Georgian food. The hospitality-trend forecaster af&co. recently named it “Cuisine of the Year.” The “Dish of the Year,” the company says, is khachapuri, a term that refers to any number of Georgian cheese-filled breads. (The 2018 winners were Israeli food and rotisserie chicken.) As the trend report noted, khachapuri is photogenic. The dish has been tagged thirty-five thousand times on Instagram, where the version from the Adjara region—an oval slab topped with cheese and a runny egg—is a particular favorite. The yolk, exuding anthropomorphic cuteness, looks like the center of a winking eye. According to the Los Angeles Times, you can get khachapuri in Hollywood, at Tony Khachapüri, which just opened inside a Vietnamese restaurant called Banh Oui. (The family of one of the owners happens to come from Armenia, which borders Georgia to the south.) It is prepared, untraditionally, with garlic sauce. The crust comes dusted with everything-bagel seasoning.

Then, there’s Georgian wine. A couple of years ago, archeologists working at sites south of Tbilisi unearthed shards of pottery that were coated in oenological residue from 6000 B.C. This means that Georgia, probably the world’s oldest winemaking culture, has completed around eight thousand vintages. Almost every family makes wine. In the traditional method, grapes are aged with their skins in earthenware vessels called kvevri, which are buried underground. Many are left to ferment without much intervention. Georgia was making natural wines, using more than five hundred native grape varietals, before natural wine was a movement. White kvevri wines are especially distinctive. Their color is often closer to deep peach or amber, and they tend to have a highly tannic, brawny taste. If rosé is essentially red wine that’s made like white wine, the so-called orange wines at which Georgia excels can be thought of as whites that are made like reds. In 2017, Georgian exports of wine to America increased by fifty-four per cent from the previous year.

The Danish chef René Redzepi has described Georgia as home to “one of the last great undiscovered food cultures of Europe.” With a relatively plant-centric cuisine and an ancient winemaking tradition, it is well suited for the moment, in which both wine consumption and anxiety about the environment are on the rise, perhaps not unrelatedly. It’s not just the allure of Georgian gastronomy that has led to its growing visibility abroad. The Georgian National Tourism Administration is working hard to convert buzz into durable economic opportunity. In 2018, the agency brought eight hundred foreign journalists to Georgia, treating them to hospitality that, according to one participant, “borders on pathological.” On one trip, a group of American wine writers were shuttled to a vineyard in western Georgia, where a husband-and-wife winemaking team introduced them, as a writer from Vice recalled, to “a fresh and fruity rosé,” made from a little-known grape. “Somm crack juice,” one of the participants observed. (Never leave home without a glib comparison.) Goodbye, Riesling; hello, Orbeluri Ojaleshi."
Posted by Eric at 9:36 AM