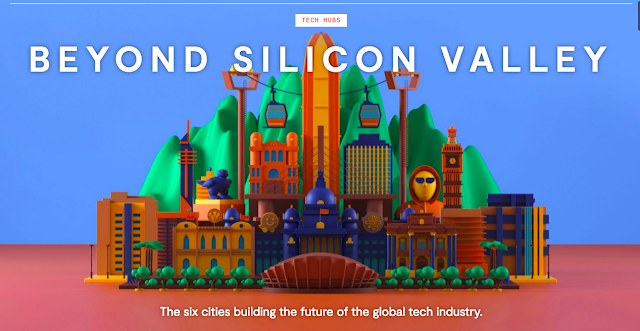 Rest of World – "Beyond Silicon Valley: The six cities building the future of the global tech industry."

"Every hour, 77 people move to Lagos from other parts of Nigeria. Everything happens in Lagos. It’s the cultural and commercial center of Nigeria, home to the country’s oldest bank and its largest independent film studio. And it’s the hub for the country’s fastest-growing sector: technology.

Lagos is home to Jumia, the continent’s largest e-commerce company. But the city’s most prominent startups are in fintech — perhaps no surprise, given that the task of moving money around is still the most important challenge within Africa. Tech startups in Lagos are international in scope, with access to local funding through a growing venture capital network and a much larger pot of funds available through foreign VCs. Y Combinator, the Silicon Valley-based startup accelerator, held its first and only event in Africa in Lagos in 2016, a sign of the city’s growing influence within global tech circles.

The growth of the tech sector in Lagos almost feels inevitable, a natural extension of just how much the city draws everything into its orbit. The centralized nature of the city has spurred innovation, even as entrepreneurs now bemoan just how concentrated Lagos is."