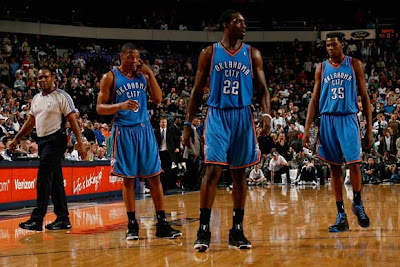 The young Oklahoma City Thunder (formerly Seattle Supersonics) are the future and possible now of the NBA. Coming off two home wins including a Saturday-night 21-point blow-out in their series against the #1 seeded Los Angeles Lakers I'm beginning to regret not taking the 45/1 NBA Finals Las Vegas odds.
Not feeling the hype? Read basketball columnist god Bethlehem Shoals take on the Thunder coming off just their first victory Thursday night in his Playoff Talking Points - April 23.

"But, at the risk of drooling straight through my keyboard, this team is really unlike anything I've seen in years. It's the Warriors with more than a prayer, the Hawks with a plan ... they're the promise of LeBron as an entire team. Just think about it: Kevin Durant, who compensated for dingy shooting with a 19-rebound night and a lockdown job on Kobe late, is 21; Russell Westbrook, looking increasingly unstoppable and in control, also just got his drinker's license. Just keep sleeping on Jeff Green; he matters and is but 23 years of age. Rookie James Harden is 20, and Serge Ibaka, perhaps the biggest surprise of these playoffs, also just 20. Okay, so defensive specialist Thabo Sefalosha is 25.

You see where I'm going with this? I don't want to turn this into Sam Presti-worship, but really, to put together this core of talent, and have them already seriously challenge the league's elite is pretty unreal. What's more, while they do play like adults, we're increasingly seeing OKC do what I asked: cut loose, run, shoot, use their boundless ability and skill in the open court. Durant on Kobe was the perfect example of that. Why not stick the hyper-competitive, long-as-all-rivers team leader on an aging superstar whose iron will just might bend to KD's? Turning Ibaka loose has proven to be a key factor in OKC's latest leap forward.

It's not just that this team is so good, so young, or getting better so quickly. Or the perfect fusion of chemistry and advanced basketball logic seems to be what guides their make-up. This was history last night, not because of Oklahoma got a playoff win. It was the first win for a Thunder team that, unless there's an awful accident or Toni Braxton-like scandal, is rising fast and might be the only thing messing with LeBron in this coming decade." 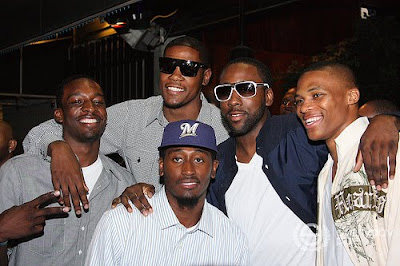 RELATED:
Bethlehem Shoals and FreeDarko just released the cover for their 2nd book on Amazon.com
The Undisputed Guide to Pro Basketball History: A History coming out November 9, 2010.
Posted by Eric at 10:52 PM