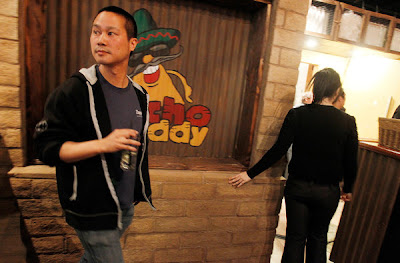 "Tony Hsieh didn’t look much like a modern-day Bugsy Siegel. Wearing backpack, T-shirt and jeans, standing outside a downtown bar, he patrolled his future empire along East Fremont Street here one sweltering morning.

But the flamboyant Siegel changed this city for good when he built the Flamingo Hotel, the first luxury casino on the Strip. Now Mr. Hsieh, a soft-spoken 39-year-old Internet billionaire who runs Zappos, the online clothing store, plans to do something as transformative. It’s a classic American dream: a Western-scale roll of the dice in a city that suddenly conjured up Belle Époque Paris and ancient Rome out of the desert. The idea this time is to build a version of the Mission district in San Francisco or the Williamsburg section of Brooklyn in downtown Vegas.

Mr. Hsieh (pronounced shay) is relocating Zappos headquarters from Henderson, Nev., about 16 miles away, and investing hundreds of millions of his own dollars to retrofit downtown with, well, a downtown, in line with the latest trends."

"...Mr. Hsieh began to picture a different vision for the neighborhood: as an affordable locus for upscale young adults, having little or nothing to do with gambling.

In some ways, the most fascinating aspect of this vision is the relocation of Zappos. Moving its headquarters downtown represents a pointed alternative to the multibillion-dollar suburban office parks that Google and Apple are building in Silicon Valley, notwithstanding that so many of their own employees want to live in, and commute from, San Francisco. Mr. Hsieh has bought into the solid notion that chance encounters on the street or at a club — urban collisions — spark innovation: cities, inherently, nurture the economy and culture."
Posted by Eric at 8:59 AM

If you have the money and the time or if you are already sure how to pay the surgery, you can schedule a consultation with the surgeon of your choice. Professional surgeons will discuss in details the procedure, the recovery time, the implant that you will use and all the necessary best breast augmentation las vegas information that you need to know…..