The Tao of Pete Carroll 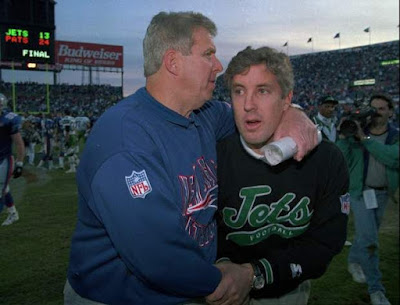 "“I’m interested in how culture influences grit,” says [Angela] Duckworth[, a psychology professor at Penn]. “And Pete has very deliberately created a culture that encourages passion and perseverance—the two components of grit.”

In Carroll she sees what psychologists call an authoritative parent: warm but demanding, unconditionally supportive but with high expectations. And so she agreed to meet with the Seahawks. No one mentioned the Super Bowl by name, but everything they talked about was really about Seattle moving past it.

The Tao of Pete didn’t fully form until Carroll was well into his 40s, in his third decade as a football coach. He had a personality and a style, but he didn’t have a system. Nothing that he’d written down. Or turned into a book. The Jets fired him from his first head coaching gig after one season, the Patriots after three. It’s not that Carroll failed; his record in four seasons as an NFL coach stood at a respectable 33–31. But major success had eluded him.

He took a sabbatical, almost a year off, in 2000. There’s a famous story about the epiphany Carroll had around this time. He was reading a book by John Wooden that described how it took the old UCLA coach 18 years to win his first national title. And then Carroll slammed the book shut, inspired. He took the USC job in December of that year and started to write down not only what he wanted to accomplish but how he would go about it. He filled legal pads and the outsides of manila folders with so many notes that he ran out of space to write. He dissected every aspect of performance. Details that seemed small—like having players preorder for the Trojans’ omelet station in order to save a few minutes at breakfast each morning—were implemented to improve efficiency. He asked his assistant coaches to explain their vision in 30 words or less, and then he invited Snoop Dogg and Bubba Watson and janitors and actors and CEOs onto campus and asked them the same thing.

He turned the Trojans into a powerhouse and all those notes into a book called Win Forever. To Carroll, it became less about the victories and more about the process. He exposed the Trojans to myriad influences, demanded they put in the work and then supported their follow-through. If it all felt a little rah-rah—some called him Pom-Pom Pete—what mattered most was that his players believed him."

"“Everyone said he couldn’t coach in the NFL,” says Mike Garrett, Carroll’s athletic director at USC. “They said he was a college coach. But I always felt like he wanted to go back. Like he had something to prove.”

Carroll did not adapt his approach for pro players, guys who are supposed to roll their eyes at Tell The Truth Monday or Competition Wednesday, those motivational gimmicks that purportedly work best in college. He hired a competitive surfer-turned-sports-psychologist. He studied sleep patterns. He brought in Bill Russell and Will Ferrell and Jon Gruden as guest speakers. He held a shooting competition between former SuperSonics Detlef Schrempf and Shawn Kemp, complete with a fog machine, a laser-light show and introductions from CenturyLink Field’s P.A. announcer. He sought advice from musicians like Macklemore and a former president, Bill Clinton.

“It always came back to competitiveness,” he says of the motivational ploys, the nontraditional hirings, the myriad guests. “I didn’t have a word for it, but it’s striving for something, not against something. Then I found a name for it.”