"Find something you love" 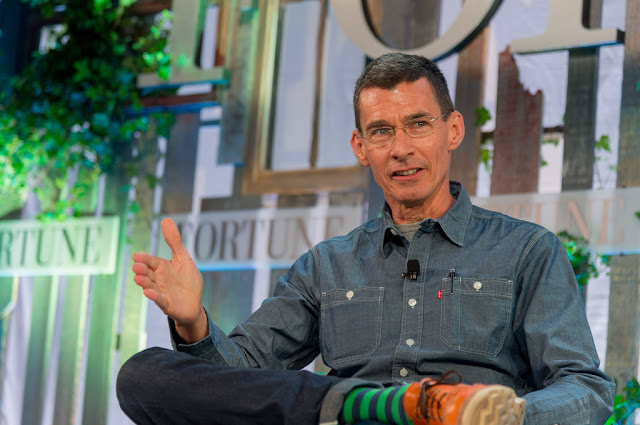 A. I grew up in the suburbs north of New York City. My life was a little bit like “Mad Men.” My dad worked for NBC, in sales. He was out the door at 6 every morning and would roll back home at 8 at night.

I played sports in high school, baseball mostly but also basketball. I still run and swim and do triathlons. Sports has contributed to me always wanting to be a winner. I’m competitive. Not a stab-you-in-the-back kind of competitiveness. I like a clean fight, but I always like to come out on top.

Q: How have your parents influenced your leadership style?

A: Parts of the story aren’t necessarily the best parts of my life. My dad was an alcoholic, and the family was somewhat dysfunctional until about the time I got into high school. One night, my dad came home very drunk, and my mom threatened to throw him out, change the locks and never let him back in the house again.

That day, my dad sobered up and never had a drink the rest of his life. As the oldest, I shouldered a lot of that family dysfunction.

My mother was a preschool teacher at the Presbyterian Church. She was diagnosed with cancer when I was in college, and the doctors told her she had six months to live. She lived for 20 more years. She was tough.

The fact that my family was a bit broken in my younger years is part of what drove me into sports, and team sports especially, where you’re surrounded by friends and constantly supported.

I put on a face that my family was normal and I was going to get good grades, persevere and be disciplined to push through, despite everything. I’m still very disciplined about how I manage my time.

Q: Early leadership lessons for you?

A: I was at Procter & Gamble, which was a promote-from-within company that placed a huge emphasis on the role of the manager to develop their people. In fact, it was part of your performance review.

My first hire was supersmart, but he really wasn’t performing over time, and I felt pressure to get this guy promoted. I basically carried him and got him promoted. But about four months later, he was gone for performance reasons.

Being extremely transparent builds trust over time. I’m not a big fan of organizations where people backstab or talk behind others’ backs. So when I’ve led teams, it’s always been about how we work together to get the best results.

But politics can creep pretty quickly into any organization.

I’ve got some trusted people who will tell me if that stuff’s going on behind my back. If I see it, you’ve just got to squash it like a bug as soon as it happens and not tolerate it.

You have to be really clear about how we’re going to operate, and if you can’t play that way, then you should probably find another team to play on.

Q: It sounds as if you’re pretty comfortable having tough conversations.

A: It comes from a couple of things. The first is recognizing that people really do make the difference. Even winning teams are going to pare their rosters in the off-season. Where do we need different skills?

You have to look holistically at the people on your team and constantly look for ways to strengthen the team. I’ve never regretted moving too fast to let somebody go. I’ve had times when I’ve regretted waiting as long as I did to make a move.

That said, I also have some great turnaround stories where people were coached and showed they could raise their game. It’s a fine line on when you make the call, but rarely, looking back, did I move too early.

Q: What are some things you’ve done in terms of the culture?

I had an hour scheduled for each of them, and by the end, I was really clear about the company’s DNA, and the values that were really important to everyone who works here.

A: When I’m hiring for the executive team, the first thing I’m looking for is leadership. I’ll ask them to tell me about a specific leadership challenge they had and how they worked through it.

Second, do they have a clear track record of success and winning? The best way to do that is to go through the résumé and talk about their biggest wins. I want to know if they’re naturally wired to be competitive. And are they intellectually curious? Would they rather ask questions or tell somebody what to do? How do they learn?

I’ll also ask them to tell me about their biggest failure and what they learned from it. What did they take away from it? How did it change them?

Q: What career and life advice do you give to new college grads?

A: Find something you love because you might be doing it for the rest of your life. Passion is worth 10 index points. If you really love what you’re doing, it’s not work.