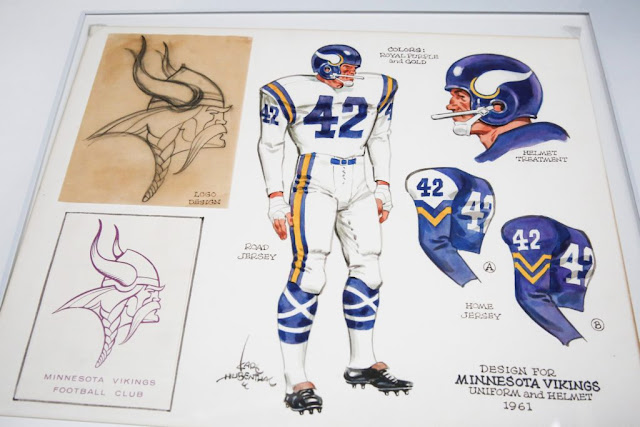 The Athletic – "The man behind the iconic Vikings logo: Remembering the life of Karl Hubenthal"

"In 1960, the Vikings’ initial ownership group was prepping for their inaugural season, choosing the NFL after initially agreeing to join the upstart AFL. Ownership named Bert Rose, the former Los Angeles Rams public relations director, as its general manager and he chose Norm Van Brocklin, a former quarterback who had played for the Rams, as the franchise’s first coach.

But responsibilities were vast for the pair with a debut season on the horizon, and they were left overseeing the design of the team’s uniforms and logo. So they called Hubenthal, whom they’d known from their time in Los Angeles. They didn’t have much direction for Hubenthal other than the team name, which was chosen to celebrate the Scandinavian heritage in the state. And Rose had graduated from the University of Washington, so he liked the colors of his alma mater, purple and gold.

Today, logo creation is a multi-million-dollar industry. The Vegas Golden Knights, the most recent expansion team in one of the U.S.’s top four pro leagues, charted private jets for meetings with Adidas and the NHL’s marketing department as they developed their logo and jersey.

But back then the Vikings trusted Hubenthal, who sat quietly in his office and designed the uniforms and still-in-use horned purple helmet. His daughters often walked by and occasionally offered a helping hand, but he preferred the solidarity of his studio.

Given the decades that have passed, it’s rather remarkable how little has changed from what Hubenthal originally designed. The helmet is nearly identical. The Norseman logo was updated in 2013, but the core of what Hubenthal envisioned remains the same. "
Posted by Eric at 9:55 PM