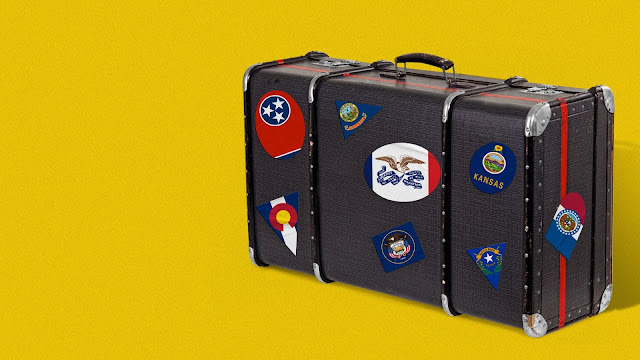 From Axios @Work Newsletter:
For decades, the share of Americans moving to new cities has been falling. The pandemic-induced rise of telework is turning that trend around.
Why it matters: This dispersion of people from big metros to smaller ones and from the coasts to the middle of the country could be a boon for dozens of left-behind cities across the U.S.
By the numbers: 22% of American adults either moved or know someone who moved during the pandemic, according to a Pew Research Center survey.
Flashback: Fewer than 10% of Americans moved to new places in 2019, the lowest rate since the Census Bureau began tracking domestic relocations in 1947.
The two biggest exoduses are out of New York City and San Francisco, per data from moving companies cited by Bloomberg's CityLab.
HireAHelper said requests for help moving out of a New York or San Francisco home were 80% higher than requests to move in over the summer.
United Van Lines saw moves out of New York and San Francisco jump 45% and 23%, respectively, during the summer months. And while many of the people moving out of these cities are going to other superstar metros — the top destination from San Francisco is Seattle, and the top destination from New York is Los Angeles — many other are relocating to smaller, up-and-coming cities, like Tampa Bay, Raleigh, Houston and Denver.
The impact: Before the pandemic, the top 15 most expensive cities in the country had just 19% of the population but the vast majority of business activity, writes Adam Ozimek, chief economist at Upwork, which connects freelancers to employers. Now, with remote work, 49% of business spend on Upwork's platform is going from those cities to lower-cost places, he notes.
And while companies like Facebook and Microsoft have said they'll adjust workers' salaries according to the local cost of living if they move to less-expensive places, the relocation could still be worth it, Ozimek says.
The price-to-income ratio — which is the ratio of the median price of a home to the median annual household income in a given area — in the top 15 most expensive cities is double (or more) than in the rest of U.S. cities.
But, but, but: The migration numbers have been inflated by the massive spike in young adults, aged 18–29, moving back home during the pandemic.
"I think this is temporary," says University of Toronto urbanist Richard Florida. While nearly 30 million young people have moved back in with their parents since March, most of them will return to the big cities they left when the pandemic is behind us.
The bottom line: It's too early to tell whether American migration has made a true comeback, but the pandemic has — at least in part — shaken up a decades-long period of stagnation in the country.
Related,
WFH Future (July 2020)
The Cool-ification of Mid-Size Cities (December 2019)
Posted by Eric at 7:57 PM