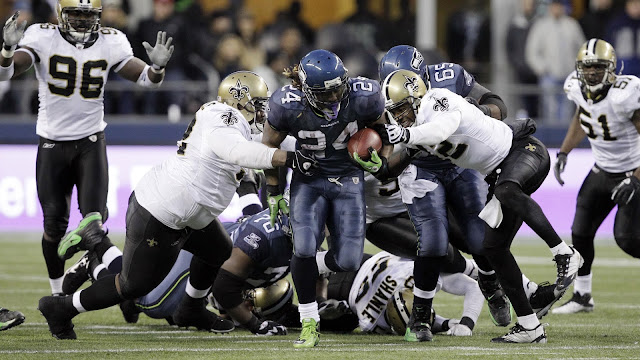 Amid a morass of broken tackles, the “Beast Quake” was born.

Lynch — a 215-pound, 24-year-old torpedo — laid waste to New Orleans’ defensive line, burrowing through Scott Shanle and Will Smith’s feeble tackle attempts. At the second level, Darren Sharper and Remi Ayodele each latched onto a leg — and Lynch shook them off like Forrest Gump finally breaking free of his metal braces. Jabari Greer wrapped his arms around Lynch’s waist at the 49-yard line, and received a 4-yard ride before unceremoniously tumbling to the turf.

Which is when Tracy Porter ate the most iconic stiff-arm in NFL history. As the Qwest Field crowd came irreparably unglued, the 185-pound corner attempted to wrangle a loose lion by tugging on its fur. Instead, Lynch launched Porter seven yards into the stratosphere, then skirted through defensive lineman Alex Brown’s diving arms along the sideline. He veered inside, evaded a helpless Roman Harper, and somersaulted backward — exalted — into the end zone.

Added first-year Seahawks coach Pete Carroll: “It was one of the greatest runs I ever saw.”"


"At the time, at least, John Vidale didn’t see it (or hear it, or feel it). The director of the Pacific Northwest Seismic Network at the University of Washington, Vidale was working in the lab an hour or two after the game when he was told there was a play he needed to see.

“So I went to YouTube and found videos of Marshawn’s run, and it was striking,” said Vidale, who currently works as a professor of earth sciences at USC. “Some of them were taken with phones in the stands. People were just cheering forever. It was deafening. It looked like everything was shaking. So I just figured I’d see if the seismometers recorded anything."

Coincidentally, one of the PNSN’s permanent seismometers — instruments designed to gauge ground motions — was located directly across the street from the stadium. And, sure enough, it registered an unmistakable spike at precisely the moment “Beast Mode” broke free.

“But I was surprised to see it on the seismometer, because it’s just people jumping around and shouting. It doesn’t usually have the power of an earthquake.”

Usually it doesn’t. This time, it did. The sustained fervor inspired by Lynch’s 67-yard scamper reached a peak acceleration of roughly 1/20,000th of a G, and a peak motion of 1/100th of a millimeter — registering as a highly localized magnitude 1 or 2 earthquake. Vidale told The Times the week after Lynch’s run that “you probably would have felt it very easily if you were outside the stadium.”"
Posted by Eric at 2:58 PM