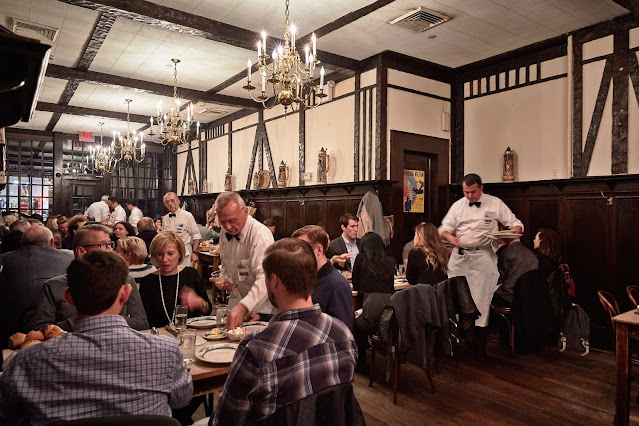 Esquire - "The New Golden Age of the American Steakhouse"

"The table is laden with slabs of beef, trays of oysters, and copper pots of pommes aligot. A waiter in a tux, tossing a Caesar salad. Iceberg’s in the air. Diners grinning at the show. One, a doubting Thomas, cuts into his rib eye, scarlet under char, and wonders, “Is this really rare?” Limbs are limber, eyes shine bright, the Barolo is empty. If Caravaggio were alive today, there is no doubt he would take his talents to a steakhouse. There is no other restaurant that better captures all that is primal, all that drama twixt life and death, all the revelry mankind can summon, all the pleasure mankind can feel, than a steakhouse.

And yet the past few years have not been kind to the American steakhouse. The plant-based revolution not only threatened its relevance but also triggered an existential crisis: Should these temples of beef even exist when it’s a known cause of climate change? The pandemic didn’t help, either. Steakhouses were hit hard. In Chicago, the unofficial capital of steakhouses, they closed at twice the rate of other types of restaurants. But the institution has persevered, and today the American steakhouse is experiencing a renaissance. Across the country, ambitious chefs are returning to the steakhouse to rejuvenate the genre, balancing virtuosity and fidelity, theme and variation. These restaurants are worth traveling to. Not just because hot damn if a skirt steak and a strong cocktail aren’t one way to achieve satori. But, more profoundly, because there’s something hopeful about how vibrant and vital an old idiom can still be.

The modern steakhouse emerged from all-male beef banquets of the mid-nineteenth century, wherein men devoured endless steak with their bare hands, often squatting on beer barrels and singing songs like “Sweet Adeline.” The first wave of proper steakhouses sought to capture this spirit, but with utensils and actual chairs—places like Old Homestead, Peter Luger, Gallaghers, and Keens, all in New York. Women were allowed in 1920, and steakhouses evolved into something classier, with salads, oysters, and cocktails. The caveman pantomime persisted and fermented into the Mad Men–era decadence of places like the Palm (near Manhattan’s East Forty-fifth Street, known as Steak Row), Bern’s in Tampa, and Gene & Georgetti in Chicago. The steakhouse was swept up in franchise madness and disseminated nationally in the form of Ruth’s Chris (the most confusing of all possessive names), Shula’s, Mastro’s, Morton’s, Del Frisco’s, and more. Around the turn of the century, in an effort to modernize, steakhouses got a makeover. They transmogrified into their second wave: the big-watch untz-untz establishments of the nineties and early aughts. The main culprit, STK, a self-described “vibe dining experience,” spread nationwide like a plague. Generally speaking, this was not a good time in the steakhouse game."