The Men of Michigan 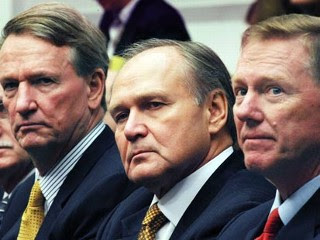 Bill Simmons' idea, from his latest column over at ESPN.com...

"So, here's my plan that I hatched during an unfathomably depressing Thanksgiving game in Detroit: If the state of Michigan were a struggling athlete, we'd say, "Man, he needs a change of scenery." Well, why can't we give Michigan a change of scenery? What if we sold Michigan to Canada since it's right on their border?

Think about it. Canada gets the spiritual lift of purchasing one of the 50 states, as well as musicians like Kid Rock, Bob Seger and Eminem, a second NBA and MLB team, two Big Ten schools, another NHL team, its first NFL team and, of course, more territory. Canadians would be flying high ... so high they wouldn't even mind that they were now involved in the WNBA. Meanwhile, America would escape billion-dollar buyouts for the car companies, and if we need a 50th state, we can always use Puerto Rico as long as it doesn't put us over the luxury tax. Michigan natives get universal health care, a fresh start and a chance to feel like they're spending more money than usual with the Canadian dollar. Everyone wins! I'm a genius. Just wait until I become Sports Czar and I talk my man Barry into this."

Funny stuff, until the last two sentences.
Posted by Eric at 6:49 PM

I live in Michigan and personally I love this idea. Kudos to Bill Simmons for coming up with a plausible solution to America's problems. He should present this idea to the President.