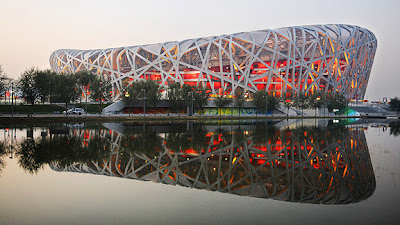 There's a heavy bias in this sports stadium analysis / critique of recent New York stadia (the Jets/Giants New Meadowlands, new Yankee and Mets ballparks and the new Brooklyn Nets arena), but I think it's pretty on point.

Grantland - "The Architecture of Disaster"

"How can the former architectural capital of the globe (the Chrysler Building; Frank Lloyd Wright's Guggenheim; that black cube balancing on one of its corners down on Astor Place in the East Village, ...erect three buildings so irrelevant in design that they were greeted by a collective, global yawn — when they were greeted at all?

Because, I suspected, the architecture of most of our national stadiums is now, officially, an afterthought. The revenue jones has reduced design to irrelevance — even though a killer, eye-opening edifice, in the long run, is worth its weight in publicity gold."