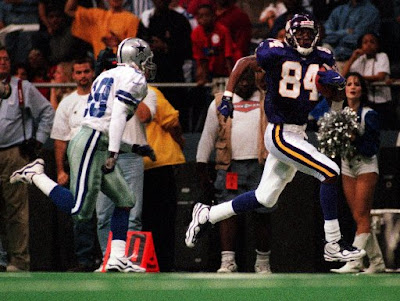 My all-time favorite football player. Randy Moss inspired me to play and love the game as a young 10-year-old.

"If he is retired, let me tell you he’s one of the five greatest players I ever played with. That means that he’d be right there next to Warren Moon, Reggie White, Randall McDaniel and John Randle.

Like he is the best wide receiver talent wise that I’d ever seen. And I’ve worked with every wide receiver that’s been in the NFL the past 25 years and none of them compared to Randy. None of them could do what Randy can do on the football field with his mind and his body and he wanted to do it Randy Moss is is. I’m a say this, for me to play with him it was surely a pleasure. I’ve never seen a man do what he could do. So if is this end, what an unbelievable career.”
-Cris Carter talking about Moss on Sportscenter today

This is a wonderful opinion. The things mentioned are unanimous and needs to be appreciated by everyone.
free web templates