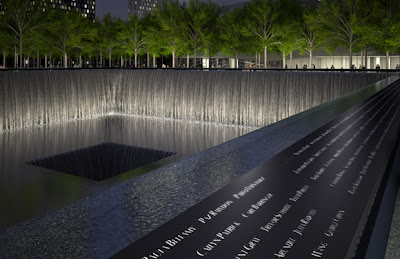 "This month, a small portion of Ground Zero will open to the public, to mark the tenth anniversary of the terrorist attacks. Because so much of the site is unfinished, the main thing on view will be the memorial to the victims of the attacks, built on and around the footprint of the two World Trade Center towers. This is chiefly the design of Michael Arad, a young architect whose entry was chosen, in 2004, from among fifty-two hundred entries, the largest such contest in history. Early on, public officials made the sensible decision that, whatever happened at the site, nothing new would rise exactly where the Twin Towers had stood. Arad didn’t tiptoe around the footprint; instead, he made it the basis for a strong, almost minimalist design, turning the footprint of each tower into a square hole, with waterfalls running down the sides into a reflecting pool below. At the center of each reflecting pool is another, smaller square, into which water tumbles, as if it were flowing to the center of the earth. Arad figured out how to express the idea that what were once the largest solids in Manhattan are now a void, and he made the shape of this void into something monumental. The names of those who died are inscribed in inch-and-a-half-high letters cut into bronze panels that surround both pools. The lettering will appear dark during the day, and by night will glow, with lighting hidden below the panels.

Early in the design process, Arad was teamed with the landscape architect Peter Walker, who shares his minimalist sensibility, and they have made the space around the two footprints a handsome and restrained civic square, with oak trees, benches, and light poles giving the place a kind of quiet, firm order. You wouldn’t mistake it for an ordinary park or urban piazza, but it isn’t a cemetery, either. You feel a sense of dignity and repose, and you see the shapes of the renewed city in the rising skyscrapers, as you should. Ground Zero can’t be a place where your thoughts escape completely into history, as at Maya Lin’s extraordinary Vietnam Veterans Memorial, or on the battlefield at Gettysburg. You are in the middle of the city, part of an urban life that was as much a target of the terrorists in 2001 as the lives of three thousand people. The people will not come back, but the life of the city has to. When you stand in Arad and Walker’s park and look toward the footprints ringed by names and the new towers behind them, you feel the profound connection between these two truths."
-Paul Goldberger
New Yorker - "Shaping the Void"
Posted by Eric at 12:16 PM