The Hip Hop Inspiration Behind Hamilton 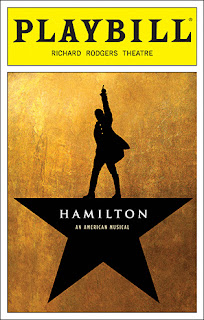 "I’ll tell you a few of the hip-hop references that peek through. When Hamilton says, “I’m only 19, but my mind is old,” in “My Shot,” (a line echoed by his son Philip later), that’s Prodigy of Mobb Deep, on “Shook Ones Part II.” There’s a bit of the hip-hop classic “The Message” in “What’d I Miss.” And “Say No to This,” when Hamilton’s eye begins wandering, starts with a quote from LL Cool J’s “I Need Love.”

The section of “Right Hand Man” in which George Washington is courting Hamilton to come work by his side reminded me of “Coming of Age,” from Jay Z’s debut album, “Reasonable Doubt.” It’s a back-and-forth between him and a hungry protégé, Memphis Bleek. Jay is looking for an eager student, and I can imagine Bleek coming back at him with Hamilton’s refrain: “I am not throwing away my shot.”

And Biggie, Biggie, Biggie. For a certain stripe of hip-hop fan, Biggie is the ne plus ultra. I’ve got all of “Ready to Die” and “Life After Death” committed to memory, and I suspect Miranda does, too. “10 Duel Commandments” is, natch, a remake of “10 Crack Commandments,” with its same blend of horror and pathos. And the “if you don’t know, now you know” Jefferson drops in “Schuyler Defeated” is straight out of “Juicy.”

But most strikingly, when Hamilton confronts his own mortality, in “It’s Quiet Uptown,” I couldn’t help but think about Biggie’s “Suicidal Thoughts,” still one of the most chilling hip-hop songs of all time. The characters have different paths, but both have ended up exhausted, frayed, desperate.

To me, Miranda is a storyteller first and a rapper maybe fifth, or maybe a storyteller in an age when rapping is the most effective megaphone."
Posted by Eric at 2:19 PM