The Best American Stadiums and Arenas 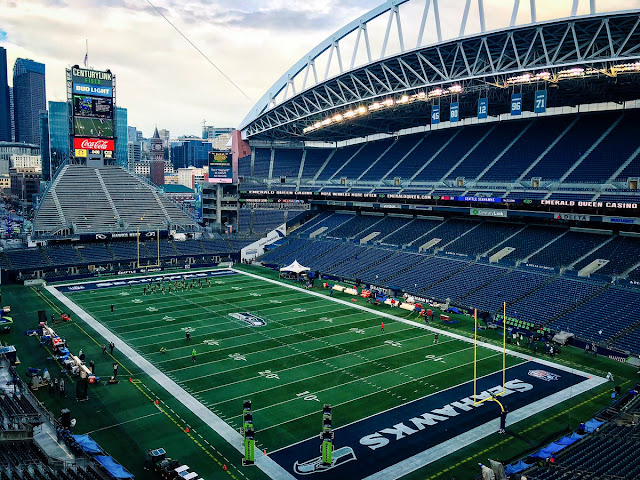 This stadium tied for the most top-five votes but fell one first-place vote short in the tiebreaker. Ten NFL stadiums have opened since CenturyLink, but it competes well with all of them. It doesn’t have a roof, but it gets as loud, if not louder, than any of the stadiums that do.

Like CenturyLink, this stadium landed on 23 ballots, finishing second to only Lambeau Field with seven first-place votes. It’s only four years old and that shows. There’s a unique look to it inside and out.

Vikings reporter Chad Graff: “U.S. Bank Stadium has a few features that separate itself from the rest of the pack, even among the newest stadiums. Of course, you’d have to start with the transparent roof, the first of its kind on a North American stadium. From the seats, you can see the downtown skyline through the glass. Many early-arriving fans for the Super Bowl two years ago wore sunglasses, offering an outdoor feel in a state where you usually wouldn’t want to be outdoors in February. (It gets so bright that they had to install curtains for the Final Four.) From the outside, the glass paneling offers cool reflections of both the skyline and the sunset. There’s no overhanging, massive jumbotron that could distract from actually watching the play below, and, importantly, the seats are spacious and comfortable. It’s not perfect, of course. Occasionally, the corridors can feel a bit cramped. But in a time where many of the modern stadiums feel similar, Minnesota’s stands out.”"

Few ballparks do a better job mirroring the feel of its city. From the color scheme to the actual materials used to build the structure, there is no mistaking that this ballpark is in Seattle.

The exterior of most ballparks is made of brick and steel. Target Field’s is made of limestone, some of which can be seen from the playing field. The boomerang-shaped roof over the main seating bowl is distinctive, as are the dimensions. This is the best of the newest wave of ballparks."

The Athletic – "The Athletic’s NBA Arena Rankings: Some buildings are always a spectacle"

I wonder if being relevant only four years out of three decades of existence has anything to do with an apathetic and mostly absent crowd. The building itself isn’t much to write home about, although they have made renovations. Wolves crowds only seem to care when missed free throws by the other team will result in a free giveaway. And with the way this team has played almost every year since 2004, it probably shouldn’t even necessitate missed free throws to give this crowd something for free.

“Target Center is the quietest arena by a wide margin.”

“It’s been a terrible team forever, so the crowds are generally small and have been given little reason to get rowdy.”"

The Athletic – "NHL arena rankings: Grading every team’s rink from best to worst"
Posted by Eric at 1:48 PM