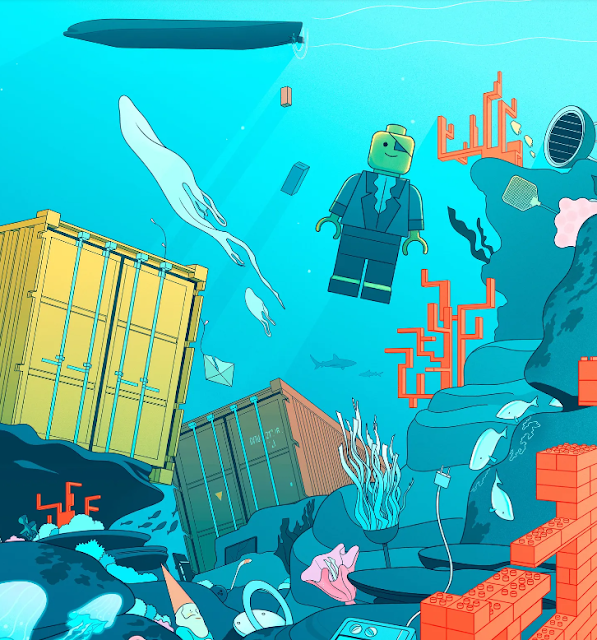 New Yorker - "When Shipping Containers Sink in the Drink"

"All of this changed in 1956, because of a man named Malcom McLean. He was not originally a shipping magnate; he was the ambitious owner of a trucking company who figured he would be able to outbid his competitors if he could sometimes transport goods by waterway rather than by highway. When his initial idea of simply driving his trucks onto cargo ships proved economically inefficient, he began tinkering with removable boxes that could be stacked atop one another, as well as easily swapped among trucks, trains, and ships. In pursuit of that vision, he bought and retrofitted a couple of Second World War tankers, and then recruited an engineer who had already been working on aluminum containers that could be lifted by crane from truck to ship. On April 26, 1956, one of the tankers, the SS Ideal-X, sailed from New Jersey to Texas carrying fifty-eight shipping containers. On hand to witness the event was a higher-up in the International Longshoremen’s Association who, when asked what he thought of the ship, supposedly replied, “I’d like to sink that son of a bitch.”

That longshoreman clearly understood what he was seeing: the end of the shipping industry as he and generations of dockworkers before him knew it. At the time the Ideal-X left port, it cost an average of $5.83 per ton to load a cargo ship. With the advent of the shipping container, that price dropped to an estimated sixteen cents—and cargo-related employment plummeted along with it. These days, a computer does the work of figuring out how to pack a ship, and a trolley-and-crane system removes an inbound container and replaces it with an outbound one roughly every ninety seconds, unloading and reloading the ship almost simultaneously. The resulting cost savings have made overseas shipping astonishingly cheap. To borrow Levinson’s example, you can get a twenty-five-ton container of coffeemakers from a factory in Malaysia to a warehouse in Ohio for less than the cost of one business-class plane ticket. “Transportation has become so efficient,” he writes, “that for many purposes, freight costs do not much affect economic decisions.”

For an object that is fundamentally a box, designed to keep things inside it, the shipping container is a remarkable lesson in the uncontainable nature of modern life—the way our choices, like our goods, ramify around the world. The only thing those flat-screen TVs and Garfield telephones and all the other wildly variable contents of lost shipping containers have in common is that, collectively, they make plain the scale of our excess consumption. The real catastrophe is the vast glut of goods we manufacture and ship and purchase and throw away, but even the small fraction of those goods that go missing makes the consequences apparent. Six weeks after the Tokio Express got into trouble at Land’s End, another container ship ran aground sixteen nautical miles away, sending dozens of containers into the sea just off the coast of the Isles of Scilly. Afterward, among the shells and pebbles and dragons, residents and beachcombers kept coming across some of the cargo: a million plastic bags, headed for a supermarket chain in Ireland, bearing the words “Help protect the environment.”"