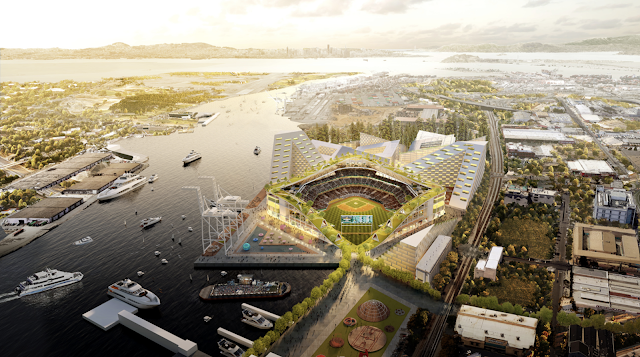 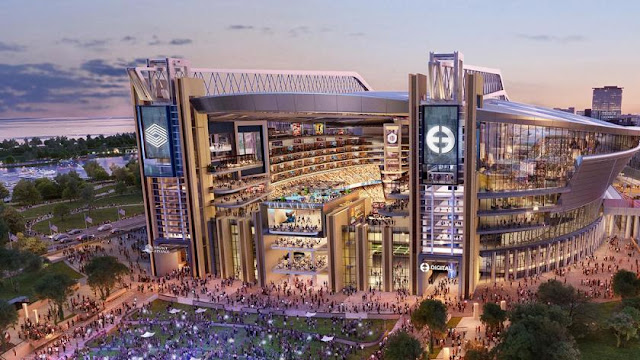 The Ringer - "The Baseball Stadium That “Forever Changed” Professional Sports"
By Dan Moore
"Baseball stadiums are never only about baseball. Their utility is both more dynamic and more poetic; as writer and critic Paul Goldberger put it in Ballpark: Baseball in the American City, baseball stadiums are the “ultimate American metaphor.” The metaphor works on at least two levels. As spiritually public places containing “a garden” at their heart, ballparks evoke a tension between “the rural and the urban”—the Jeffersonian preference for the pastoral; the Hamiltonian impulse toward the industrial—that has “existed throughout American history.” Done right, they evince what beauty that tension can produce, the creative potential of this American conflict. But so, too, do baseball stadiums—through design quirks, topographical accommodations, structural evocations of local history—represent characteristics particular to the cities and time periods in which they were constructed. They’re expressions, in this way, about nothing less than how we live.

It’s perhaps by virtue of this fact that baseball stadiums also inspire in fans a unique and very personal kind of devotion and pride. We love our stadiums. Fans whose teams play in stadiums that are iconic—Fenway Park, Wrigley Field, Dodger Stadium—tend to regard them with an almost religious sort of reverence. Fans whose teams play in stadiums that are not yet so historic, meanwhile, often treat the prospect that they one day might as a reason for hope. This is why all new parks, when they finally open to fans, receive heraldic welcomes. Now this, we say, as we trundle wide-eyed through the pristine silver turnstiles for the first time, is the beginning of something new."

"Baltimore is another example. Though Camden Yards has not been nearly as costly for Maryland as stadiums have been for other state and local governments, it has still lost the state a fair amount of money. According to economists Bruce Hamilton and Peter Kahn, authors of a 1997 case study on Camden Yards that appears in Sports, Jobs, and Taxes: The Economic Impact of Sports Teams and Stadiums, even in the halcyon period after Camden first opened, when the Orioles were selling out every game, Camden Yards never broke even. In 1997, the Maryland Stadium Authority recovered “approximately $6 million in rent” from the Orioles “and another $5 million in admissions tax revenue,” as it was entitled to by the Orioles’ lease, but the annual cost to the state of operating the stadium was much more than that—about $20 million. As years passed, meanwhile, auxiliary development did not pop up at scale. “You don’t have to look far to see [Camden] hasn’t translated into an influx of development even within a mile or quarter-mile of the ballpark,” Louis Miserendino, a visiting fellow with the Maryland Public Policy Institute, told the Sun in 2017. According to Hamilton and Kahn, the verdict is clear. “Public expenditure on [Camden Yards] cannot be justified,” they write, “on the grounds of local economic development.”

Of course, “economically” is not the only way politicians or the public justify subsidizing pro sports. They also hold that subsidizing sports teams is warranted for incalculable social, psychological, and cultural reasons. Which: valid. Many people love their teams the way they love members of their own family and they don’t believe investments in them need to return a profit. And even for people who don’t closely follow their local teams, the presence of those teams can still provide valuable, intangible benefits. Like investments in parks or libraries, investments in something like a stadium can contribute to the general public good by, say, cultivating community, inspiring pride, alchemizing a newly tangible civic identity, or by simply giving strangers something to talk about at bars or in line at the grocery store. “If the real reason for extensive subsidization of major league team sports is public consumption,” Roger Noll, a Stanford economist and the editor of Sports, Jobs, and Taxes, has written, “the validity of economic impact studies is not very important.” As Schmoke, the former mayor of Baltimore told me, “We didn’t go into it thinking that this was going to be a major moneymaker for the city. We thought that it was an important amenity, like museums, things that bring people together. And our sports team had always brought people together.”

And—and!—some subsidies can, in fact, turn out to be moneymakers. Several stadiums of the post-Camden era, like those built in San Francisco, Columbus, and Sacramento, have bolstered the economies of their home cities by importing economic benefits from areas outside the city limits and by galvanizing other kinds of development in areas around the stadium. This raises property values and encourages economic activity even on days when there are no games being played or events being held: key markers of stadium subsidy success.

Such success, however, is rare. As Mark Rosentraub, professor of sport management at the University of Michigan, told me, it’s only obtainable under specific political criteria, including, importantly, high amounts of private investment to complement and effectively offset the public investment. In Sacramento, the Kings paid for more than half of their new arena. In San Francisco, the Giants paid closer to the entirety of the tab. (San Francisco paid for infrastructure and site acquisition.)"
Posted by Eric at 11:36 AM