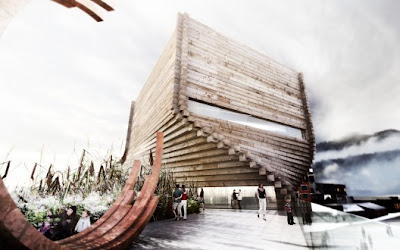 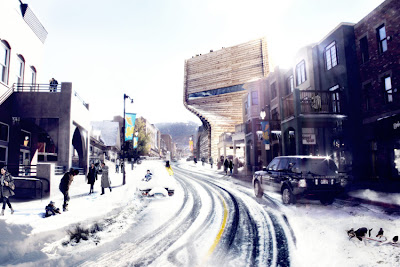 Story of the pitch was included in last week's New Yorker profile on Ingels, "High Rise."


"[Bjarke] Ingels, in a black suit and a white shirt, launched himself at the jury with funny, calibrated messages about his respect for the town and it history, illustrated with two hundred and forty images, starting with shots of BIG employees snow-tubing--"testing some recent technology in movement," he said, dryly. He linked the town's mining past to the Kimball's occupation of a garage, setting up a theme of repurposed infrastructure. Park City was a place where "the plumes of the smokestacks became the plumes of the snow cannons."

One photograph showed both the old Kimball Garage, and, a few blocks behind it, an eighty-foot wooden tower, a former mining building, that was the town's tallest structure until it burned down, in the nineteen-eighties. With that conjunction now in his audience's mind, Ingels started showing photographs of various blue foam shapes. BIG's search for the right form had "turned into this odyssey," Ingels said, as the slides sped up--a spike, a stack, a blob--then sped up further, to laughter from the audience, until the effect was of cartoon characters in the dusty blur of a fistfight. We saw a hundred models in about twenty seconds.

Robin Marrouche, the Kimball's director, later told me, "They tried it every which way on that space. That was really impressive. They'd thought this through." But there was some showmanship here; the BIG office did make those models, and doubtless considered every option, but Ingels later acknowledged that the process was unusually quick, telling me, "We basically hit this one after a week."
Posted by Eric at 12:45 AM