The Craftsmanship and Care of Ichiro Suzuki's Bats

"The case, which looks like a mini trunk, not only protects the bats from jostling and banging during transports, it also serves as a dehumidifier, drawing moisture out of the bats during the hot, humid American summers." 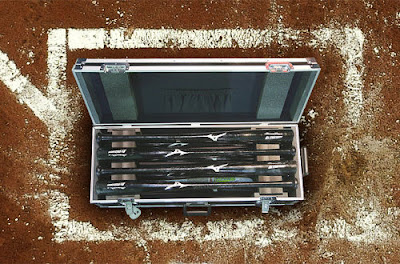 New York Times - "For Suzuki, Respect for Bats Is Key to Hitting"

"During a game for the Orix Blue Wave in Japan in 1999, Ichiro Suzuki struck out and returned to the dugout unusually frustrated. In a fit of anger, he destroyed his black Mizuno bat. Embarrassed, Suzuki wrote a letter of apology to the craftsman who had made his bats by hand from Tamo wood, grown on the Japanese island of Hokkaido. Such was the respect that Suzuki felt for the process that created the bats, which he wielded with such skill."
Posted by Eric at 11:02 PM