“And if Washington isn’t going to send their Generals then we’ll send our Globetrotters.” 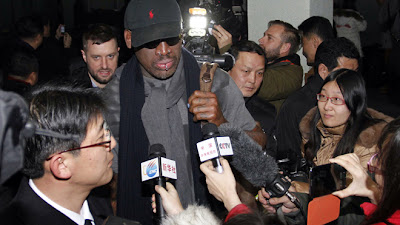 Vice Magazine and HBO have sent Dennis Rodman and the Harlem Globetrotters to North Korea "in a filmed trip billed as "basketball diplomacy."

UPDATE:
According to Gawker, "...the choice of Rodman actually seems inspired if you consider this photo of a young Kim Jong Un, glowering at the camera in Rodman's number 91 Bulls jersey from his days at a Swiss boarding school. Kim is a noted basketball fanatic, and he and his late father both shared a fondness for the Rodman-era Bulls, reportedly.

Rodman's agent claims he'll have an audience with Kim Jong Un himself."