The Creation of Channel Orange 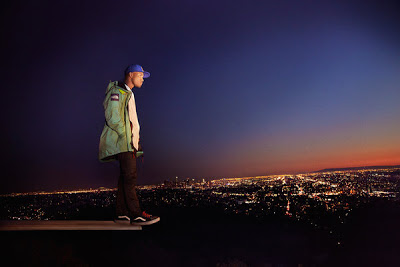 "While Malay created the musical beds, Ocean would type on his laptop, humming melodies and trying out combinations. For mood they sometimes had an old movie playing in the background with no sound, and in later stages Ocean put up posters of Pink Floyd and Bruce Lee for inspiration. Ocean’s tastes are eclectic, drawing on everything from Wes Anderson movies to Radiohead and Celine Dion. “The next thing you know, Frank’s like, ‘Let me go in the booth,’ ” Malay told me, “and then he just lays it down. He’s kind of like an M.C.,” he went on, “like a rapper. Rappers come in, and they just write lyrics and drop it down, and he’s that same way, but obviously his lyrical concepts and melody concepts are ridiculous.”

After a couple of months of on-and-off work with Malay, Ocean had skeleton versions of every song that would appear on “Channel Orange,” including the nonsong interludes that create so much of the record’s ambient appeal. On a dry-erase board in his apartment, he wrote the names of the songs and the interludes with a red Sharpie and began playing around with their placement. “Even though they were all sketches,” Ocean says, “there was so much comfort, because I heard in my head how it was going to sound. Now all I’ve got to do is finish it.” Once he arrived at the final album order, with nine months of recording still ahead of him, the sequence never changed."

"After the recording was complete, Ocean played “Channel Orange” for Rick Rubin, the legendary producer and founder of Def Jam. Rubin was impressed by the rawness and power of Ocean’s vocals, and he urged him not to mess around with the recordings too much. He was also struck by Ocean’s process for a song like "Pilot Jones," for which Ocean wrote the melody to one backing track and then, with Malay’s help, created a completely different backing track once the melody was complete. “It’s really interesting that he uses seed ideas or tools to write that really don’t have anything to do with the song,” Rubin told me. “It’s just a way for him to access himself, and then the song comes out, and then the track is built around what he writes.”
Posted by Eric at 7:56 AM