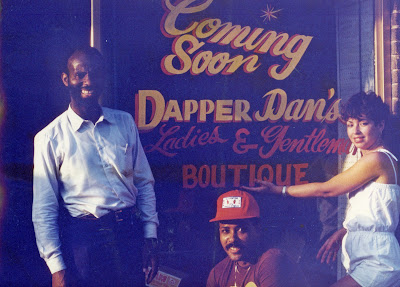 "Not long afterward, this curiosity spread to lawyers at the Manhattan firm of Pavia & Harcourt. They came across a picture of [Mike] Tyson wearing an odd Fendi jacket -- odd because the firm represented Fendi, and yet no one there had ever seen a jacket like that. Tyson's shopping habits had become notorious, so it didn't take long to figure out where the jacket came from. One of the lawyers assigned to Fendi was Sonia Sotomayor, the current Supreme Court Justice. In her autobiography, "My Beloved World," Sotomayor explains that the firm's primary target was the growing wave of "cheap knockoffs of Fendi handbags." Although there were federal and state laws against trademark violations, prosecutions were rare, and so companies like Fendi often used civil actions. Lawyers would get a sealed order from a judge, allowing them to seize suspected counterfeit goods and hold them until trial; when the suspected counterfeiters failed to appear, as they generally did, the goods were destroyed.

In researching these cases, Sotomayor often relied on Dempster Leech, a private investigator with a thoughtful manner who had emerged as perhaps the city's foremost expert on luxury counterfeiting. His raids frequently took him into the tunnels beneath Canal Street, where Asian gangs dominated the profitable knockoff market. He didn't know what he might find at Dapper Dan's Boutique, so he prepared for the worst: he added extra security, and he made sure to schedule the raid for daylight hours, in case it got chaotic. Sotomayor, Leech, and half a dozen private security guards rushed into the shop, where they found no violent resistance but lots to look at. The racks were full of name-brand clothing, and the walls were lined with celebrity photographs; in the window hung the most impressive custom jackets, waiting for their buyers to come up with the final payment.

Leech was accustomed to grim back rooms full of assembly-line knockoffs, so he was imrpessed by Day's quirky, do-it-yourself enterprise. "It was a much more artisanal process -- a high-fashion place," he says He was especially struck by the hand-operated silk-screen table, and by a Jeep with a Fendi-logo roof, which was among the goods seized. Day was unhappy, of course, but he stayed calm; the raid was, by all accounts, a polite affair, especially compare to the tense, sometimes violent raids on Canal Street. Leech says, "I recall, Sonia was -- I can't say that she didn't mind it. Obviously, she was representing the Italian designers. But she thought it was kind of funny. And kind of fun, too."

From the perspective of a trademark owner, a counterfeiter gets no points for creativity or quirkiness."
Posted by Eric at 7:18 PM