Not Worried About Craft Brews. The Global Beer Race 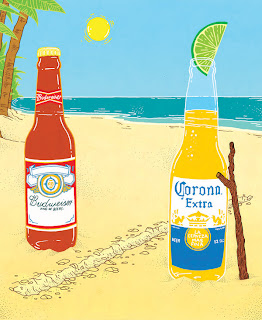 New York Times - "Are We in Danger of a Beer Monopoly?"

"We are still in the very early stages of what appears to be a global version of the scale-based consolidation we’ve seen in the United States over the past century. Before Prohibition, beer was largely a regional business, with thousands of small breweries serving markets often defined by city blocks. Until fairly recently, retail, food manufacturing, banking and countless other industries were also largely the domain of local or regional firms. And while in recent decades companies have scrambled to command international markets, the global fights have largely been over dominance of the United States, Western Europe and Japan.

But the goal of the Grupo Modelo merger, the company has stated, is to gear up for the big beer fight of the 21st century. As the traditional beer markets of the United States, Europe and Japan age, the most lucrative markets will be in China, India, Latin America, Eastern Europe, the wealthier countries of Africa and other places where, every single day, millions of young consumers will buy their first legal beer. On this front, AB InBev is already facing staunch competition from Denmark’s Carlsberg, Britain’s SABMiller and Japan’s Asahi. It’s not exactly worried about Sam Adams and Sierra Nevada."
Posted by Eric at 7:43 PM