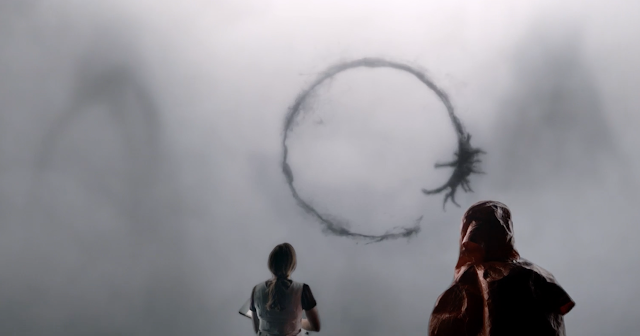 Bryan Bishop: "The film pretty openly drives home the idea that humanity cannot survive if it is tribalistic and fragmented, which between Brexit and the US election have become foregrounded concerns. Were you consciously working that into the story?"

Denis Villeneuve: "The main thing I was attracted to was this idea of exploring culture shock, exploring communication, exploring this idea of language changing the perception of your reality. That was gold. The idea of the geopolitical transformation of the world is something I felt we have seen in other movies before, and it was not the strength of Arrival. It was something that needed to be there because our goal was to create a movie where the aliens have a stronger level of realism, so we needed to see the impact of those landings all across the globe. But I try my best to stay on Louise's perspective all the time, so it’s seen from an intimate point of view.

What is funny is that as we were doing the movie, sometimes there were things [in the film] where I was saying to myself, "Oh, come on. People are more wise than that." And then I would open the newspaper in the morning: "No, we're okay. We're not going too far.” Even in the editing room, [editor] Joe Walker and I were sometimes wondering if we were going too far, and reality was always pushing us to stay there."
Posted by Eric at 10:40 AM