Harden "thrives on strength and guile" 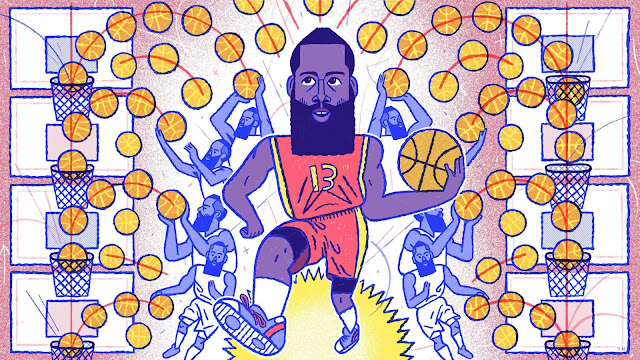 "Harden is not the NBA's most dazzling star, nor its most aesthetically pleasing, nor its most cuddly. He thrives on strength and guile, not outlandish athleticism. Purists will forever grumble about his foul-seeking and flailing. But there is no denying his brilliance or his killer efficiency.

Give Harden space, and he'll sink a 26-footer. Defend him tightly, and he'll be in the lane within two steps, sending up a soft floater. Send help, and he'll find the open man, every time.

"He has some of the most lethal footwork, especially with the ball in his hands," says Detroit's Reggie Jackson, a former teammate in OKC.

"There's no one like him," says Dallas Mavericks veteran Wes Matthews. "He's unique."

LeBron James is the greatest player of his generation. Curry is the game's greatest shooter. Russell Westbrook is a terror and Kevin Durant an athletic marvel. But Harden, with his abacus-rattling array of deep swishes and point-blank buckets, might just be the scruffy face of the Analytics Era, the star who most embodies the advanced-stats ethos.

"Even we thought it would come back to Earth," Morey says. "It hasn't. He continues to be one of the all-time greats at driving to the hoop, getting a layup, getting fouled or creating an open shot for someone. It's very basic, but that's pretty much the thing that separates him."

Those gaudy assist numbers? They shouldn't be much of a surprise, at least to those who have watched Harden closely over the years. Rival coaches say Harden was the Thunder's best playmaker—better than Durant or Westbrook."
Posted by Eric at 3:16 PM