The ‘Fearless Girl’ Statue Next to Wall Street’s Charging Bull 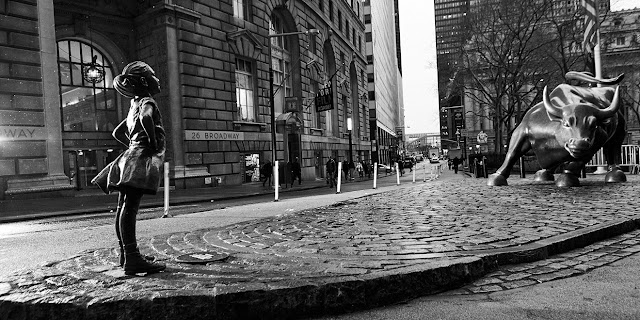 "Pedestrians in lower Manhattan had a new piece of branded art to ponder on Tuesday morning, as McCann New York and client State Street Global Advisors conspired in the middle of the night to drop a statue in Bowling Green Park of a girl facing off against the famous Wall Street Charging Bull.

The stunt, timed to International Women’s Day on Wednesday, is meant to symbolize the power of women in leadership. More specifically, it’s part of a campaign by SSGA to emphasize that companies with women in top positions perform better financially.

The sculpture, titled “The Fearless Girl,” was made by Kristen Visbal and photographed by Federica Valabrega. The guerrilla aspect of the placement is in keeping with the Charging Bull itself, which was installed without permission by artist Arturo Di Modica in 1989. It was meant to be a symbol of the strength and power of the American people following the stock-market crash of 1987. Residents fell in love with it, and the city allowed it to remain.

McCann did get a permit for the girl statue. It will be up for at least a week, says the agency, which is negotiating with the city for it to become part of the art program so she can stay longer.

The new campaign also calls on more than 3,500 companies—the ones that SSGA invests in on behalf of clients—to take steps to increase the number of women on their corporate boards.

“We believe good corporate governance is a function of strong, effective and independent board leadership,” Ron O’Hanley, president and chief executive officer of SSGA, said in a statement. “A key contributor to effective independent board leadership is diversity of thought, which requires directors with different skills, backgrounds and expertise. Today, we are calling on companies to take concrete steps to increase gender diversity on their boards and have issued clear guidance to help them begin to take action.”

An MSCI study suggested companies with strong female leadership generated a return on equity of 10.1 percent per year, versus 7.4 percent for those without a critical mass of women at the top, SSGA said. Yet one in four Russell 3000 companies don’t have even one woman on their board, and nearly 60 percent of boards are less than 15 percent women."
Posted by Eric at 10:27 AM