Kevin Durant and the Brooklyn Nets 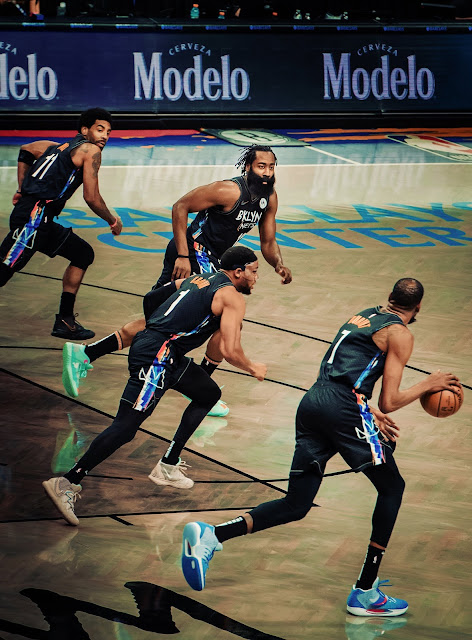 "The Nets’ Big 3 are almost comically different, physically and spiritually and stylistically. It’s like the opening screen of a video game in which you have to choose your character, each of whom comes with a different set of pros and cons. Do you want the tiny quicksilver thief (Kyrie Irving) or the burly crafty woodsman (James Harden) or the tall ethereal phantom (Kevin Durant)? Choose carefully — your survival depends on it. Somehow, Brooklyn figured out the cheat code that allows you to pick all three."

"But the Durant I met was not at all a brand ambassador. Instead he lowered himself, in slow motion, onto a long couch and asked, sincerely, “What do you want to talk about?” I said, only 20 percent joking, the meaning of life. This seemed to make him happy. We proceeded to sit there and talk for a very long time, sinking deeper and deeper into the couch, about his childhood and Chesapeake Bay and meditation and crabs and Twitter. The K.D. who hosted me that afternoon was relaxed and talkative and full of questions, both rhetorical and actual, and he seemed to have all the time in the world. It felt less like an interview than like a therapy session or a late-night dorm-room philosophy jag.

This was all classic Durant. In a sports world defined by tough-guy posturing and bulletproof messaging, he has always come off as something else: a thinker and a searcher and a wandering soul. In interviews, he will abandon the script of jock clichés and drop right into existential dread. “I go to sleep at night, like, ‘Am I going to be alone forever?’” he once told Zach Baron of GQ. And to Michael Lee of The Athletic: “I’ve been roaming my whole life. I never had no stable environment. Ever. Ever. Since I woke up.” Durant has spoken publicly about how important it is to cry. If Michael Jordan were a Dostoyevsky character, he would be Kevin Durant."

"Not surprisingly, then, Twitter has been the source of a couple of the major gaffes of Durant’s career. He once, excruciatingly, responded to a critic in the third person (“Kd can’t win a championship with those cats”) — thereby accidentally revealing that he was trying to defend himself, anonymously, from a fake account. (The Onion recently published an article called “Kevin Durant Spends All Day Feuding With Own Burner Account.”) More recently, Durant was caught up in a furor when Michael Rapaport, a professional loudmouth, exposed a series of inflammatory messages — including sexually explicit and homophobic language — that Durant had made to him, months earlier, as the two argued in the D.M.s. (The N.B.A. eventually fined Durant $50,000.)"
..
"What Durant understands, he explained, is that the people writing to him aren’t actually writing to him. Kevin Durant, to them, is just an abstraction, a guy on the TV, a figment of their imaginations. So what they are doing is projecting onto him the pain or hatred or longing that they actually feel about real things in their own lives. This is why he likes to write back. He wants to show them that he is an actual human, just like them, with his own fears and hatreds and longings. He wants to connect with them on that level. Even the angry ones, he believes, have good hearts. Hatred, he told me, is just another form of passion, and therefore a sign that you’re really alive."