The Brilliance of N'Golo Kanté 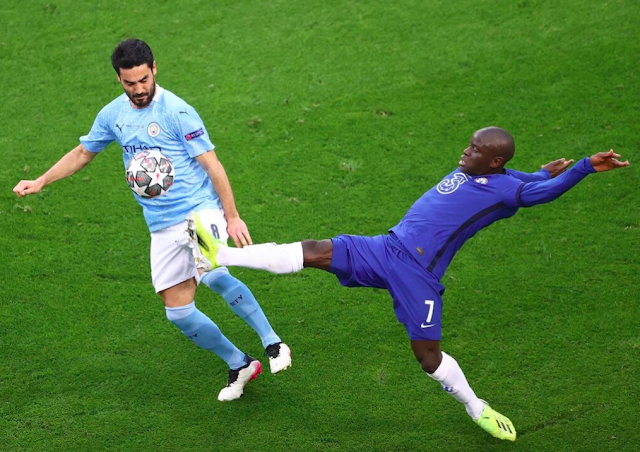 The Guardian – "N’Golo Kanté: the one-man midfield who conquered Europe for Chelsea"

"Kanté isn’t simply a tackler or a runner, he’s a mobile brain, an agent of cohesion. Most tellingly he’s human kryptonite to the false nine system that continues, 15 years on from its Pep-led renaissance, to baffle more rigid defensive structures."

"Arsène Wenger was probably underselling it when he described N’Golo Kanté’s performance as “unbelievable.

”With metronomic, almost eerie regularity, City built attacks only to find out that at the key moment, Kanté was there, in just the right place to win a tackle, at just the right angle to block a pass, at just the right time to interrupt the plan. At time, it felt as if someone had passed Kanté a script. He did not wait for instruction from the side. He just went to where the danger was, and eliminated it.

Kanté was, in his own way, no less decisive here than Lionel Messi was in the 2009 and 2011 finals, or Cristiano Ronaldo was in 2014. The fact he is still pigeonholed as a holding midfielder means this will not be remembered as “the Kanté final,” but it would hardly be unwarranted.

But to focus exclusively on his destructive capabilities, formidable though they are, is to do Kanté a disservice. He was also, often, the one who led Chelsea’s counterattacks. He determined the shape of the midfield. His passing helped to destabilize City’s defense. For a few minutes in the first half, he did a passable impression of Frank Lampard, turning his hand to breaking into the City penalty area, timing his run late.

He did what great midfielders do, and shape-shifted as the flow of the game demanded. No wonder, as tends to happen with Kanté, a meme appeared at one point, detailing the great midfield threesomes of the recent past: Barcelona’s Xavi, Andres Iniesta and Sergio Busquets; Real Madrid’s Casemiro, Toni Kroos and Luka Modric; and Kanté, all by himself."