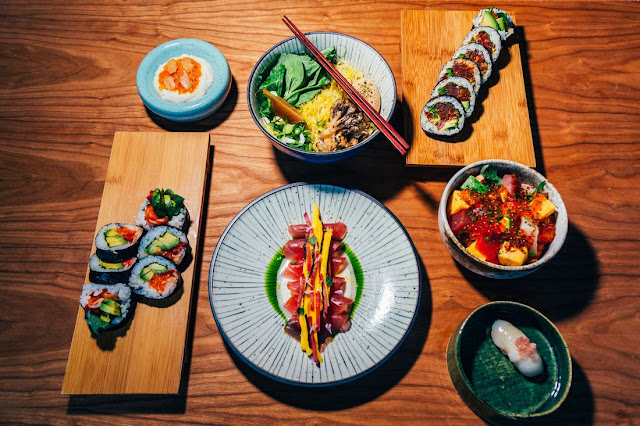 NY Mag – "The Future of Sushi?"
By Adam Platt

"Like most businesses in the city, the restaurant industry is filled, these days, with rumors of disruption and change. Will the tourists come back? (Probably.) Will the rents stay low? (Nope.) Will the business lunch ever return to fashion, not to mention the good old lunchtime salad, munched furtively in your messy cubicle? (Hmm.) Does Daniel Humm’s Twitter-shaking announcement that Eleven Madison Park is going to a meatless menu in the immediate post-pandemic future mean the death of haute cuisine as we know it? (Not likely.) Will the $30 all-beef gourmet burger endure during this urgent, newly reimagined era, never mind the fat-cat, expense-account-fueled New York steakhouse, and will the legions of Zoom-addled sushi bros return to their windowless ritualized omakase bunkers and start forking over thousands of dollars for shreds of endangered tuna ever again?

The big-city steakhouse is probably safe for now, but if you want a glimpse into what the disrupted future might look like for that other fat-cat expense-account destination, the sushi parlor, I suggest you book a seat at Rosella, which opened late last year in a comfortably stylish East Village space across from Tompkins Square Park. The sushi master in residence, Jeff Miller, went to college in Gainesville, Florida, and trained in Austin, Texas, instead of Tokyo, Osaka, or L.A., and most evenings you’ll find him preparing his artful nigiri menu wearing a Florida Gators cap on his head. Instead of a Japanese symbol or character, the restaurant is named after a breed of Australian parrot (Miller first fell in love with cooking in Australia), and unlike in many of the more traditional sushi joints around town, Brazilian funk plays over the sound system along with the occasional dulcet, bouncy song by the Clash.

But the biggest difference between Rosella and your average hushed, priestly pre-pandemic omakase destination is the sourcing of your meal. There are no esoteric shrimp from Hokkaido on the menu or delicate saori (needlefish) flown in directly from the chilly waters of Tokyo Bay. Most of the fish is local or curated from sustainable farms in Europe or around the U.S. The sushi rice, which is mingled with vinegar and sake in the traditional way and mixed in wooden tubs four times per day, is grown in California. The fat pearly shrimp come from the Gulf, the scallops are hoisted from the stormy seas off Montauk, and when Miller served me bigeye tuna one evening, he took pains to explain that tuna was out of season now but that his favorite supplier kept choice cuts in the back of the freezer to send to special clients. "