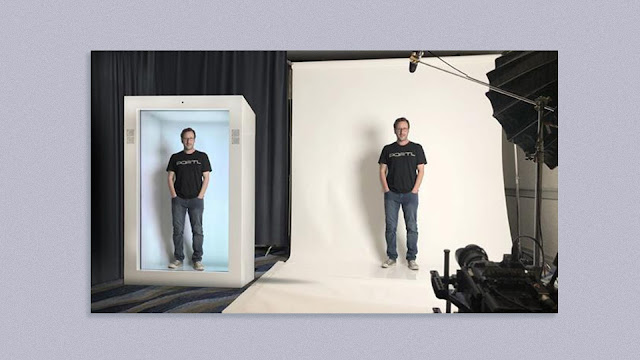 "A company called PORTL sells a 7-foot-tall booth into which you can beam a 3-D image of yourself anywhere in the world."

"Details: People can "beam into 100 portals at the exact same time," Nussbaum says.

The person doing the teleportation must have authorization from the PORTL owner to beam in. "It’s very easy" for the owner, he says: "You just plug it into the wall and you turn it on."

The lead investor in the company's last investment round was Tim Draper, the superstar venture capitalist.

How it's being used: During the Major League Baseball All-Star Game, "we allowed fans to beam into a PORTL, and it looked like they were beaming into a hologram baseball card," Nussbaum says.

P. Diddy beamed in from Florida to his son's birthday party in L.A.

IWC, the Swiss watchmaker, holoported its CEO to an event in Shanghai.

The University of Central Florida — which got a PORTL this summer for its medical education program —is building a library of recordings with real-life patients who holoported into student classrooms."