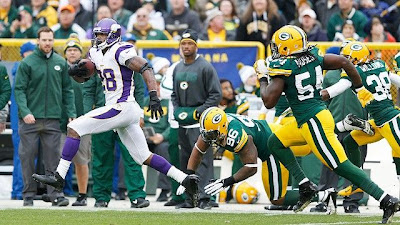 Grantland - "The Passion of Adrian Peterson, or, a Purple Pilgrim's Progress"
by Steve Marsh

"Peterson's DNA carried his parents' dreams with it, both fulfilled and otherwise. AP's mother was a three-time Texas All State Sprinter at Westwood High School in Palestine before matriculating as a scholarship sprinter and long jumper at the University of Houston. Nelson was a McDonald's All American out of high school before attending Idaho State. Nelson was granted a tryout with the Philadelphia 76ers, but back at home in Houston before training camp, his brother fumbled with a gun he was cleaning and shot Nelson in the thigh. He would never play basketball again." 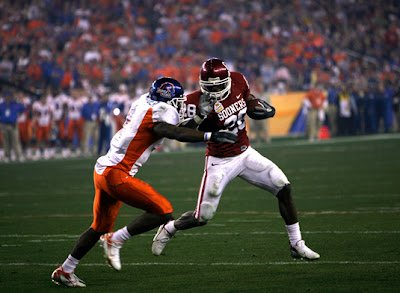 "AP's progress was more than steady. He went in for surgery a week early because of a remarkable lack of swelling; because he didn't lose much muscle mass, he was jogging at six weeks on the Vikings' underwater treadmill, sprinting at eight weeks, and running on dry land at 10 weeks. Sugarman started agility rehab at about 15 weeks. But it was five months in when he started having breakthroughs. 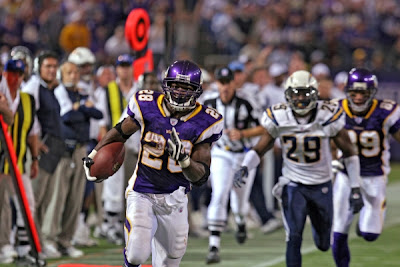 "Maybe the NFL has evolved into such a quarterback's league, such a finesse game, that AP's DNA had to find another avenue to impress us. Or maybe his recovery from this injury actually has improved him. Maybe he really is, as his coach says, better than ever (he seems more patient, more willing to use his fullback's help, for instance, while retaining his relentless whirling-dervish-ness). It's not even a year since he tore his ligament, and with 1,600 yards, Peterson is leading the NFL in rushing by more than 300 over the next guy, Marshawn Lynch. In fact, he has a chance to join the small fraternity of 2,000-yard rushers, even a slight chance at breaking Eric Dickerson's all-time single-season rushing record of 2,105."