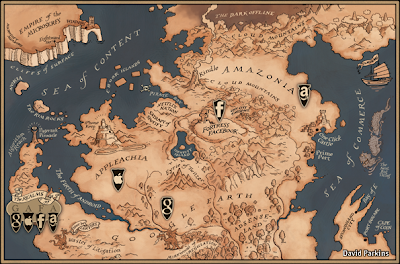 The Economist - "Technology giants at war: Another game of thrones"

"Google has turned search into a huge money-spinner by tying it to advertising. Facebook is in the process of doing something similar with the way people's interests and relationships are revealed by their social networks. Amazon has made it cheap and easy to order physical goods and digital content online. And Apple has minted money by selling beautiful gadgets at premium prices.

"...the rivalries shaping the market today are even richer and more complicated, not least because they have a personal edge. Three of the big four are still run by men who made their billions as founder, or co-founder, of their empires-Amazon's Jeff Bezos, Google's Larry Page and Facebook's Mark Zuckerberg. And although Jobs no longer rules Apple, he groomed Tim Cook, his successor as chief executive. "In the modern history of technology we have never seen such a highly engaged group of chief executives and founders..."