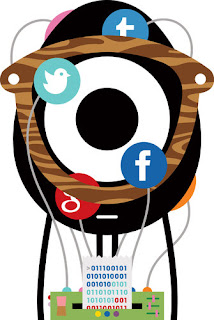 "Dave Morgan, a pioneer in Internet advertising and the founder of Simulmedia, an ad network for TV, points to the early years of electricity. In the late 19th century, most people associated the new industry with one extremely valuable service: light. That was what the marketplace understood. Electricity would displace kerosene and candles and become a giant of illumination. What these people missed was that electricity, far beyond light, was a platform for a host of new industries. Over the following years, entrepreneurs would come up with appliances — today we might call them “apps” — for vacuuming, laundry and eventually radio and television. Huge industries grew on the electricity platform. If you think of Apple in this context, it’s a $496 billion company that builds the latest generation of electricity apps."

Artwork by Darcel Disappoints
Posted by Eric at 1:56 AM