Museum of Old and New Art

"Walsh is a leader of what Australian newspapers describe as the world's biggest gambling syndicate, a group of seventeen known as the Bank Roll. The Bank Roll's leader is Walsh's best friend, Zeljko Ranogajec, a fellow-Tasmanian who's been described by the Web site Blackjack Insider as one of the "most innovative" blackjack players of all time. Frequently portrayed in the media as the world's biggest gambler, Ranogajec is perhaps its most elusive."

"It's an amazing story," Zeljko Ranogajec said, reflecting on their lives. "But the most amazing thing is the museum"

"Designed like a Borgesian labyrinth, lit like a night club, MONA, since it opened on a remote island, with a population of five hundred thousand, has attracted more than seven hundred thousand people. Visitors came first from Tasmania, then from Australia, and now, increasingly, from the world -- a growing caravan of celebrities, art lovers, aficionados, camp followers and the curious. In less than two years, MONA has become Tasmania's foremost tourist attraction and a significant driver of its languishing economy. Lonely Planet listed Hobart as one of the world's top ten cities to visit in 2013, largely because of MONA." 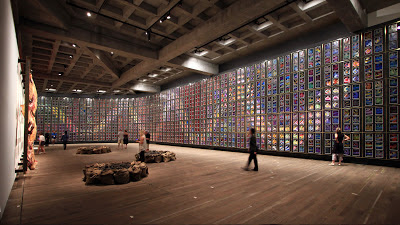