The 2013 Class Baseball Hall of Famers 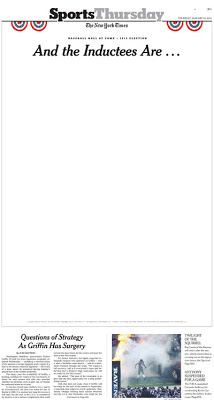 "And now for a special edition of MAKE IT STOP, where we list everything in the past week that was tiresome, exhausting, and downright exhaiusting.

I think one of the funniest things about Hall of Fame controversies is that athletes care so much about getting into them. You're Jack Morris. You've won two World Series titles, earned plenty of money, and got to ply your craft in front of tens of thousands of admiring people for years and years. Does your life really need any further validation? Who gives a shit if you don't get a plaque in some rural museum?

Because that's what a Hall of Fame is. It's a museum. It's not some magical place that determines literal immortality. There are plenty of forgettable human beings jammed into various Halls of Fame. There are plenty of unforgettable players who are on the outside looking in. Bo Jackson isn't a Hall of Famer in any sport. Do you care? No. He's Bo fucking Jackson. His legacy on the field was plenty. He doesn't need an ugly yellow jacket to let him know he was awesome. And I don't know why so many other players do. Roger Clemens risked going to jail just to get into the Hall of Fame. He still has his records. He still has his World Series ring. He still has his money. HE WON. Yet he still risked everything just to get his name on a plaque. Can you imagine how tiny that guy's dick must be?

The Hall of Fame is a con. It's a tourist attraction designed to make news annually. The people presiding over who deserves and doesn't deserve to get in are a comical mix of misanthropes, drunks, hacks, and bitter old fogies with axes to grind. There's nothing legitimate about the process, but we're so used to the Hall of Fame's bullshit by now that we just take it and move on. And it does a disservice to actual visitors of the Hall. The reason people visit a Hall of Fame is to get a sense of a sport's history. Ideally, this means both the good and bad of it. Of course Barry Bonds should be part of that. Of course Clemens should be part of that. Instead, you're gonna have that part of the sport's history whitewashed from the museum because JEEZ GUYS, WHAT KINDA MESSAGE IS PEDRO GOMEZ SENDING IF HE VOTES THESE FELLAS IN?

Someone is gonna wise up and open up an independent, competing Baseball Museum that's located somewhere convenient and includes EVERYONE. No judgments. No morality plays. Just the history of the sport as it ought to be told, without Joe Asshole walking around bitching that his favorite Texas Ranger didn't make the cut. That's a Hall of Fame I'd visit."
Posted by Eric at 9:44 PM