"It All Goes Back to Ron Mexico" 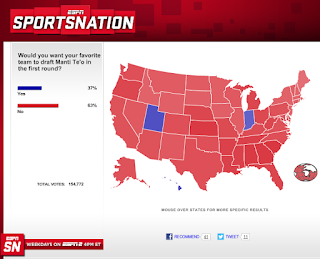 It's crazy to think back a few weeks to when Manti Te'o was in the discussion of top 5 NFL Draft picks. Now 63% of ESPN.com fans wouldn't want their favorite team to draft him in the first round.

Can you imagine an Internet or media that didn't have a site like Deadspin to fact check stories major news outlets manage to overlook?

It's actually not all as courageous as the investigative report on Te'o, but the oral history of the blog Deadspin is worth a read. 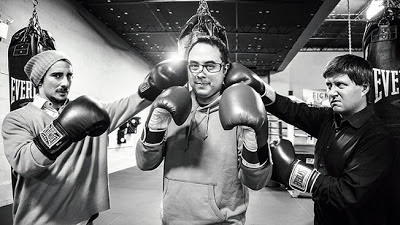 "It all goes back to Ron Mexico.

In 2005, The Smoking Gun broke the story of a legal complaint about a prominent athlete who "knowingly failed to advise" a partner that he was infected with a sexually transmitted disease. The athlete, then-phenom Michael Vick, was reported to have used the alias Ron Mexico during herpes testing, a story that quickly spread across the nascent blog culture of the Internet.

Will Leitch, an early, struggling blogger, got the idea for Deadspin after taking note of what he believed to be a failure in mainstream sports media: It wasn’t covering or even mentioning stories like the tale of Ron Mexico—stories that sports fans were eating up. Partnering with Nick Denton’s Gawker Media, Leitch launched a site that would talk to the average sports fan like a real average sports fan, eschewing, as the site’s motto goes, "access, favor and discretion."

Over the last seven years, Deadspin has grown from a one-man operation run out of a bedroom into a formidable counterweight to the sports media industrial complex of Sports Illustrated, ESPN and other players. Along the way, Leitch and successive editors have exposed star athletes and top media personalities, offended countless readers and managed to make over the culture of sports journalism, all from the outside."
Posted by Eric at 9:39 PM