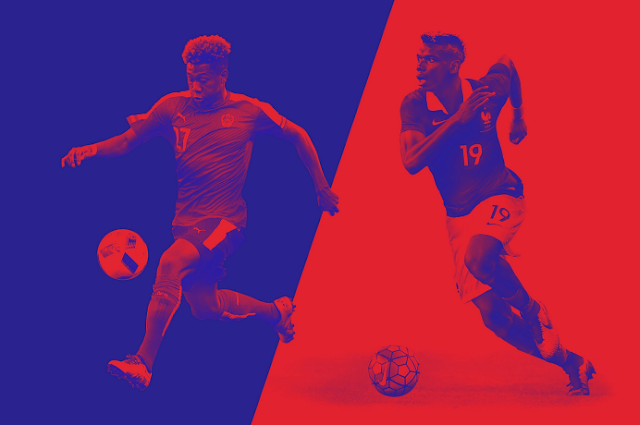 The Ringer - "The New Euro Stars"

"Since soccer produces so few definitive events per game, goalscorers — and to a lesser extent, goal creators — carry an outsize importance. It’s obvious, sure, but so is the idea that three is worth more than two, and the NBA took decades to figure that out. As clubs have begun valuing efficient chance creation — in the Premier League, the rate of goals per shot has gone up by 7 percent since 2009 — it’s fitting that the dominant players of this era are Lionel Messi and Cristiano Ronaldo, two converted wingers who stopped crossing the ball and combined to score 572 combined goals in 585 La Liga appearances.

What comes next? Will the next class of superstars be another group of less-dominant goal monsters? Or could the defining players of the next generation be a pair of 23-year-olds who influence the game without the gaudy scoring numbers?

Paul Pogba and David Alaba come at that question from different angles. The former is the flashy gamebreaker, and the latter is the guy you can’t help but notice because he seems to be everywhere at all times. In the Age of Ronaldo and Messi, as positions have become more specialized in service of efficiency, the gap between goalscorer and everyone else seemed to grow. With Pogba and Alaba that could change: They don’t score much; they just do everything else. Their “positions” are just springboards; they exist up, down, and across the field. While all narratives ultimately get formed by the club game — it’s where players make most of their money and spend most of their time — this summer’s European Championship promises to push both France’s Pogba and Austria’s Alaba into a brighter spotlight."
Posted by Eric at 9:35 AM