Boba Fett and The Mandalorian 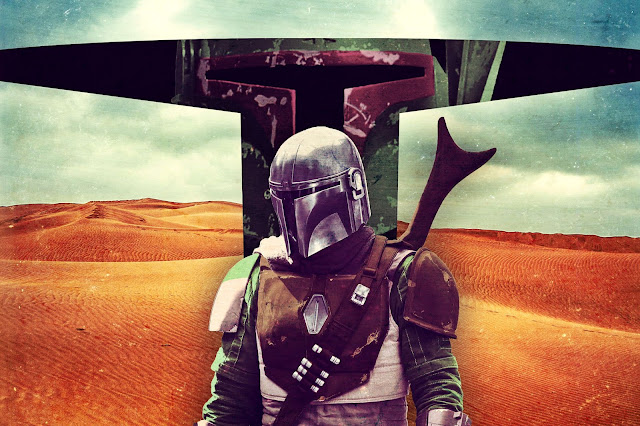 The Ringer – "Who Is the Mandalorian? Let’s Start With Who He’s Not."

"In Clint Eastwood’s 1960s collaborations with Sergio Leone—the films that both made Eastwood’s star and created the Spaghetti Western genre—he played the Man With No Name, a grizzled bounty hunter who wasn’t so much a “hero” as he was a guy whose self-interest sometimes rubbed shoulders with decency. Throughout the 100-minute runtime of their second film, For a Few Dollars More, Eastwood’s face rests at a 60-40 ratio of “ruggedly handsome” and “intimidating.” Watch the final duel again: He swaggers in, chewing on his hand-rolled cigar, stare a mile long, instantly and totally in control of the situation. The bandit deigns to make a move for his pistol. Then time slows down, and Eastwood, as cold as you could never be, shakes his head no.

It was the poncho, draped just so, that did it for actor Jeremy Bulloch. While shooting the The Empire Strikes Back, he noticed his character Boba Fett wore a cape just like it. Bulloch decided to model Fett’s mannerisms after Eastwood in Fistful, which is to say that the space bounty hunter, like the Man With No Name, is impossibly self-possessed. At least until that iconic Wilhelm scream Fett lets out as he falls—with his jetpack?—into the sarlacc pit. It was a pretty stupid death befitting a character George Lucas assumed would be minor in the long run, and not one generations of fans, filmmakers, and showrunners would find cool as hell. And this is despite him speaking only four lines of dialogue in his first on-screen appearance."

The Ringer – "How Boba Fett Became a ‘Star Wars’ Icon"

"heThe first concept artwork for Boba Fett began, like most rough sketches, in black and white. After George Lucas had established a pure villain in Darth Vader and his white-armored henchmen, he wanted to create a “Super-Stormtrooper” that could do Vader’s bidding and provide fans with another antagonist in the Empire. Eventually, wanting the character to have a bigger role in the story, Lucas rewrote him as a bounty hunter. “The Boba Fett character is really an early version of Darth Vader,” says Lucas in J.W. Rinzler’s book The Making of Star Wars: The Empire Strikes Back. “He is also very much like the man-with-no-name from the Sergio Leone Westerns.”

Beginning in 1977, concept artist Ralph McQuarrie outfitted what the design team called its “supercommando” in all white, morphing a Vaderlike helmet into a signature T-shaped visor. A year later, art director Joe Johnston took the reins on Boba Fett’s exterior technology. His early sketches showed off the wide array of gadgets the bounty hunter had at his disposal, including a rangefinder readout, shoulder guards, rocket-pack nozzles, high-velocity armor-piercing projectiles, luminous flares, laser weapons, a flamethrower attachment, utility pouches, rocket darts, and extendable kick blades. In more developed and detailed illustrations, Boba Fett sported aquamarine coloring along with a dented helmet, a woven hide belt, and a wrap-around cape stolen right out of The Good, the Bad and the Ugly."
Posted by Eric at 4:51 PM