The Monoculture Rise and Fall of Boxing 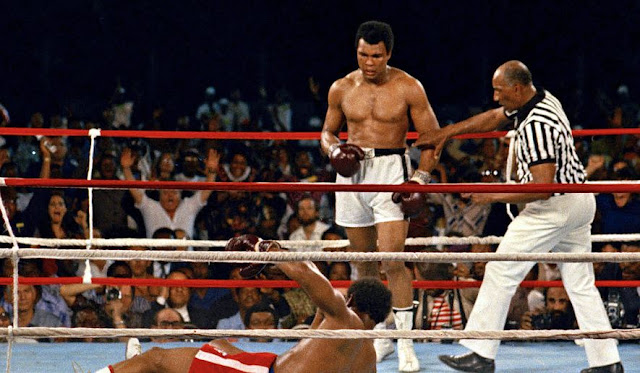 Washington Post – "Why boxing disappeared after the Rumble in the Jungle — and why football could, too"

"Like football today, boxing owed its enormous national popularity to broadcasting. Originally, in the bare-knuckled days, bouts would often be staged in barrooms while bookies placed odds among the raucous crowds. At the turn of the 20th century, however, boxing emerged as legitimate amusement. State regulatory boards, pushed by promoters, fans and the media, began to sanction the sport.

Radio capitalized on the huge crowds that swarmed arenas around the world to watch iconic champions — the first real sporting celebrities — battle it out. Radio coverage cleaned up boxing, pulling it out of the smoky bars and grimy arenas and making it presentable in every American home. The networks showcased boxing stars by creating dramatic and sensational narratives around such heroic athletes as Jim Braddock, Max Baer and Joe Louis. In the 1930s, Louis’s championship bouts were the only network programming that proved competitive in the national ratings with President Franklin Roosevelt’s fireside chats. Everyone tuned in.

By the 1930s, heavyweight championship fights paid out almost unimaginable riches to elite stars. And over the ensuing decades, as radio evolved into television and “Friday Night Fights” became appointment viewing, even the boxers themselves couldn’t believe the money involved. In 1971, right before Ali fought Joe Frazier in Madison Square Garden, the crowd watched Ali chanting something while dancing around the ring. Everyone assumed he was taunting Frazier. In fact, he was quietly repeating to himself: “Two-and-a-half million dollars! Two-and-a-half million dollars! Can you believe it?”

But that popularity encouraged promoters to search for new revenue opportunities, and they found them outside the broadcast networks, on satellite and closed-circuit pay-per-view television. That is the significance of the Rumble in the Jungle: It did not appear on network television. The live broadcast occurred in the United States in closed-circuit-equipped movie theaters. This effort to capitalize on the sport’s popularity risked losing the interest of the casual viewer. As more top fights left free television, the networks settled for lesser attractions, and the quality of the matches eroded.

And then the violence of the sport took its toll on viewers. Boxing’s future on free television was most likely sealed by a series of events in 1982. First, Ray “Boom Boom” Mancini seriously maimed South Korean Duk-Koo Kim live on CBS; Kim died a few days afterward. Less than two weeks later, while the public and politicians debated the horrifying savagery of that event, Larry Holmes pounded the face of Randall “Tex” Cobb into a bloody mess live on ABC. When the referee refused to stop the fight, a disgusted Howard Cosell turned on the sport that made him famous. Cosell’s anger presaged the frustration of his network bosses.

For them, the value proposition of running afoul of Washington’s regulators in exchange for now-second-rate sports programming with declining ratings was no longer viable. They had other options. Soon the NBA started drawing in the casual sports fan, and within a decade basketball stars filled boxing’s void in the global sporting arena. "
Posted by Eric at 11:09 AM