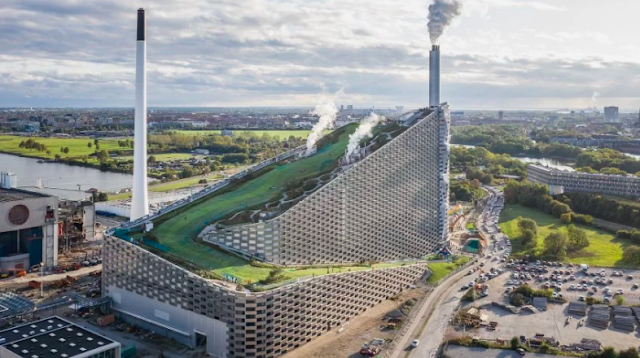 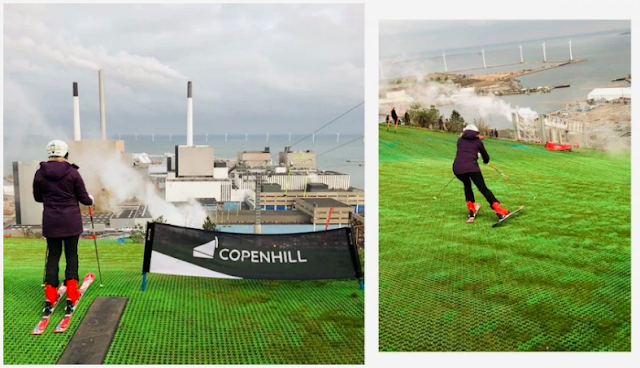 "...Amager Bakke, or CopenHill, as it’s been dubbed, is a 462,848-square-foot waste-to-energy plant—which just happens to have a ski slope on its roof—rising like a glittering aluminum iceberg from the flat plains of a semi-industrial section of Amager (pronounced, inexplicably, “am-ah”), an island that comprises part of the city of Copenhagen.

Standing at the 279-foot summit of what is now one of the city’s tallest structures presents a surreal spectacle: skiers whooshing down a vast carpet of green Neveplast, a synthetic “dry skiing” surface from Italy, amid a staggering panorama that’s dominated by the smokestacks of nearby biomass plants and, behind them, the gloomy, fog-shrouded expanse of the North Sea, dotted with massive wind turbines. Like the writer Don DeLillo’s “postmodern sunsets,” it’s at once inspiringly beautiful and vaguely apocalyptic.

CopenHill, which, along with the plant below, is owned by Amager Resource Center (ARC), offers more than skiing. You can simply hike to the summit on the marked trail for the best view in Copenhagen, stopping to admire the wild strawberries growing on landscaped sections to one side of the slope (where a fox was recently spied). You can also run that path up (there’s already a Strava segment). If you’ve any gas left, there are CrossFit bars at the top. “Last weekend we had a race with 450 people dressed as Santa Claus,” Cecilie Nielsen, CopenHill’s head of customer relations, tells me. “It was awesome.”

Come spring, one of the world’s tallest climbing walls, a twisting and weaving ascent, will open on a corner of the building, which will eventually be laced with green as the structure’s built-in aluminum window boxes begin to bloom. And, lest they forget why they are there, climbers, as they traverse along the holds, will get occasional views into the plant itself, where soaring apses support the huge and complex workings that turn Danish garbage into Danish heat and electricity.

That a cutting-edge waste-to-energy facility now also boasts the best skiing in Denmark—call it the powder plant—is thanks to native son Bjarke Ingels, one of the world’s best-known architects and an espouser of a way of thinking he’s called “sustainable hedonism,” a near oxymoronic philosophy that dares to ask the question: Can saving the world be fun?

The idea of a hill loomed, by necessity, early in the project. The engineers, Ingels says, had dictated a basic envelope for the building, based on the machinery inside. “It was this kind of tiered series of blocks that got taller,” he says, like an ascending stereo-equalizer display. “The diagram was already mountainesque.”

Initially, BIG added “the simplest kind of sloping roof,” adorned with a rooftop park. But he felt they were “staying in the realm of cosmetics,” like “putting lipstick on a pig.” He wondered if they could do something more transformative. On a site visit, Ingels noticed the nearby Copenhagen Cable Park, which whizzes wakeboarders around the harbor via overhead wires. “It just became so clear: the skiers had already arrived, but only in the summer.”

That part of Copenhagen wasn’t hurting for open space, but what it lacked—what the entire country lacked—was an enticing ski hill. “You have to drive four hours to Isaberg, in Sweden,” he says. “And Isaberg is not a very large mountain. The main slope is only a 150-meter [492-foot] drop. So it dawned on us that we could actually do two-thirds of a real mountain ski slope.” It seemed far-fetched at first. They talked to a ski-resort operator. They talked to Team Denmark, an elite-sports organization. No one told them it couldn’t be done, if only because no one had done it. “We started getting an understanding that we couldn’t actually shoot the idea down.”

Not that it was easy. As Jesper Boye Anderson, a designer at BIG, had told me in the firm’s Brooklyn offices: “You don’t open the code books and then look how to do a ski slope on top of a waste-burning plant.”"