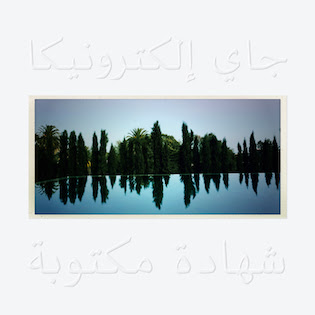 "What’s more surprising: the world crumbling around us in real time or Jay Electronica releasing a debut album, A Written Testimony, with JAY-Z on nearly every track? I gave up on the idea of a Jay Electronica solo album when I was a teenager trying to perfect the “Call me Jay Elec-Hannukah, Jay Elec yarmulke” section of “Exhibit C” in my bedroom. Yet Jay Electronica’s allure persists to this day, and “The Neverending Story,” the fourth track on the album, put me at ease for the first time in days. Over a soulful groove from The Alchemist, Jay Elec is in top form. “If you want to be a master in life, you must submit to a master/I was born to lock horns with the devil at the brink of the hereafter,” says Jay Elec, weaving myth and reality together. JAY-Z’s victory lap perfectly coexists with this wizardry: “I’m a miracle born with imperial features/I’m a page turner, sage burner, santeria,” says JAY, his swag is everlasting. Watching the two come together at such an uncertain time is cathartic."

"On “A.P.I.D.T.A.,” Jay Electronica and JAY-Z reflect on the death of close ones. The title of the song is an acronym for “All Praise Is Due To Allah”—the phrase is often used by Muslims to express gratitude. Jay Electronica is a prominent member of the Nation of Islam and is thanking God for everything in his life, including the blessing of completing his album and the trauma of losing a loved one.

During the album release live stream on Instagram, Jay Electronica said that the song was recorded on January 26, 2020—the same night that legendary basketball player Kobe Bryant and his daughter Gianna passed away in a tragic helicopter accident.

The instrumental samples “A Hymn” by Khruangbin."