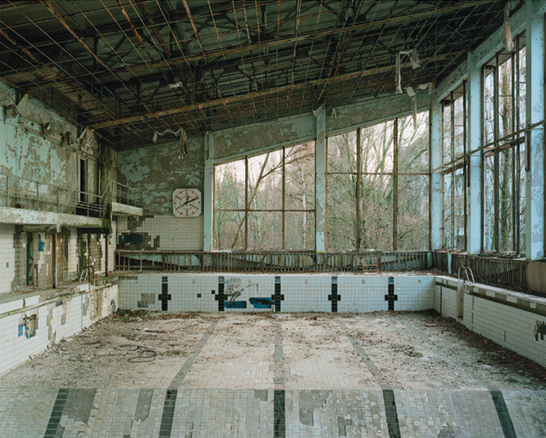 New York Times – "Why Would Anyone Want to Visit Chernobyl?"

"“All the fields are slowly turning into forest,” Igor said. “The condition of nature is returning to what it was before people. Mooses. Wild boar. Wolves. Rare kinds of horses.”

This is the colossal irony of Chernobyl: Because it is the site of an enormous ecological catastrophe, this region has been for decades now basically void of human life; and because it is basically void of human life, it is effectively a vast nature preserve. To enter the Zone, in this sense, is to have one foot in a prelapsarian paradise and the other in a postapocalyptic wasteland.

Not far past the border, we stopped and walked a little way into a wooded area that had once been a village. We paused in a clearing to observe a large skull, a scattered miscellany of bones.

“Moose,” Igor said, prodding the skull gently with the toe of a sneaker. “Skull of moose,” he added, by way of elaboration.

Vika directed our attention toward a low building with a collapsed roof, a fallen tree partly obscuring its entrance. She swept a hand before her in a stagy flourish. “It is a hot day today,” she said. “Who would like to buy an ice cream?” She went on to clarify that this had once been a shop, in which it would have been possible to buy ice cream, among other items. Three decades is a long time, of course, but it was still impressive how comprehensively nature had seized control of the place in that time. In these ruins, it was no easier to imagine people standing around in jeans and sneakers eating ice cream than it would be in the blasted avenues of Pompeii to imagine people in togas eating olives. It was astonishing to behold how quickly we humans became irrelevant to the business of nature."
Posted by Eric at 6:15 PM