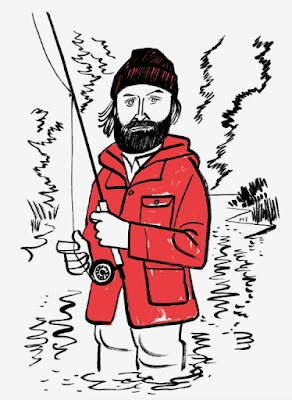 New Yorker – "Fly-Fishing with the Author of “The Optimist”"

"David Coggins, whose book on fly-fishing, “The Optimist,” comes out from Scribner this week, has fished all over. For bass in Wisconsin, bonefish in the Bahamas, salmon in Canada, trout in Montana and Patagonia. But one of his favorite places to fish is a four-mile stretch of water in upstate New York belonging to a hundred-and-twenty-year-old club that maintains a Skull and Bones level of publicity paranoia. So let’s just say it’s somewhere in the Catskills, and that the property includes two waterfalls, a gorge, some lively rapids, a couple of deep pools, and what could be mistaken for the moss-lined walls of an ancient grotto. Indoors, the accommodations are flagrantly unassuming.

Coggins spent a few days there last month, and had both good luck and bad. Fishing for trout in the spring can be trying. The water is high and cold, the fish grumpy and disinclined to rise. Some, newly arrived from the hatchery, seem stunned to find themselves in the wild, dining on bugs instead of pellets. They sometimes clump together, as if for companionship, and, seen from above, barely moving, all facing in the same direction, they resemble, in miniature, a wolf pack from a Second World War submarine movie.

On his second day, Coggins began by casting toward a man-made dam, built to create a nice feeding spot for trout. “There’s a sort of ‘Blade Runner’ aspect to this kind of fishing,” he said. “You know—what’s real, what’s artificial? What about stocking fish? Where do you draw the line?” He threw out a cast and added, “I just think of it all as part of the beauty and the absurdity of the sport.” A few minutes later, he was rewarded with a nice rainbow—a fish that in his book he calls the golden retriever of fish: beautiful, beloved, but maybe not the brightest of its kind."