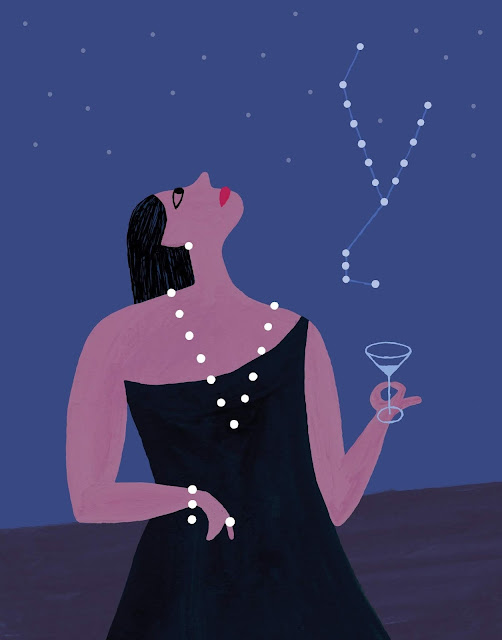 New Yorker – "Astrology in the Age of Uncertainty"

"A windowsill was lined with gifts from clients—an illustrated zodiac, a white orchid. Kelly sat cross-legged on a taupe ottoman, wearing cat eyeliner and large hoop earrings, greeting people and waving as they appeared in the online chat room. “That is one of my favorite things, as a Leo and as a person—building community,” she said. It was a little before eight-thirty, and some of the fifty-two participants—who had paid between $19.99 and $39.99 each—were typing hellos; one woman, in Europe, had set her alarm for 2:30 a.m., to log in. Once the class started, Kelly clicked through a slide deck about ancient Babylonia; William Lilly, the “English Merlin,” who was consulted by both sides during the English Civil War; and the signs of the zodiac. To explain the traits of Aries, she put up a picture of Mariah Carey (“She loves getting presents”). For Pisces, she had Rihanna and Steve Jobs. “My main favorite thing is to talk about the signs as celebrities,” she said. “Because these are modern-day mythological figures. In ancient Greece, if you said ‘Athena,’ everyone knew, Oh, that’s what Athena is like.”

Kelly’s schedule is typical for a millennial astrologer. She writes books (on zodiac-themed cocktails); does events (at the private club Soho House); offers individual chart readings (a hundred and seventy-five dollars an hour); hosts a podcast (“Stars Like Us”); makes memes (“for lolz”); manages a “virtual coven” called the Constellation Club, with membership levels that cost from five dollars to two hundred; and has worked as a consultant for the astrology app Sanctuary. She also writes an advice column for Cosmopolitan, and hosts an occasional Cosmo video series in which she guesses celebrities’ signs based on their answers to twelve questions. According to the editor-in-chief, Jessica Pels, who has expanded the magazine’s print coverage of astrology to nine pages in every issue, seventy-four per cent of Cosmo readers report that they are “obsessed” with astrology; seventy-two per cent check their horoscope every day.

Astrology is currently enjoying a broad cultural acceptance that hasn’t been seen since the nineteen-seventies. The shift began with the advent of the personal computer, accelerated with the Internet, and has reached new speeds through social media. According to a 2017 Pew Research Center poll, almost thirty per cent of Americans believe in astrology. But, as the scholar Nicholas Campion, the author of “Astrology and Popular Religion in the Modern West,” has argued, the number of people who know their sun sign, consult their horoscope, or read about the sign of their romantic partner is much higher. “New spirituality is the new norm,” the trend-forecasting company WGSN declared two years ago, when it announced a report on millennials and spirituality that tracked such trends as full-moon parties and alternative therapies. Last year, the Times, in a piece entitled “How Astrology Took Over the Internet,” heralded “astrology’s return as a compelling content business as much as a traditional spiritual practice.” The Atlantic proclaimed, “Astrology is a meme.” As a meme, its life cycle has been unusually long. “My account, it was meant to be a fun thing for me to do on the side while I was a production assistant,” Courtney Perkins, who runs the Instagram account Not All Geminis, which has more than five hundred thousand followers, said. “Then it blew up and now it’s like—I don’t know. I didn’t mean for this to be . . . life.”

In its penetration into our shared lexicon, astrology is a little like psychoanalysis once was. At mid-century, you might have heard talk of id, ego, or superego at a party; now it’s common to hear someone explain herself by way of sun, moon, and rising signs. It’s not just that you hear it. It’s who’s saying it: people who aren’t kooks or climate-change deniers, who see no contradiction between using astrology and believing in science. The change is fuelling a new generation of practitioners. Fifteen years ago, astrology conferences were the gray-streaked province of, as one astrologer told me, “white ladies in muumuus decorated with stars.” Kay Taylor, the education director of the Organization for Professional Astrology, said that those who came of age in the seventies were worried about the future of the profession. Now, she said, “all of a sudden there’s this new crop.” In the past year, the membership of the Association for Young Astrologers has doubled."

"The popularity of astrology is often explained as the result of the decline of organized religion and the rise of economic precariousness, and as one aspect of a larger turn to New Age modalities. Then, there’s the matter of political panic. In times of crisis, it is often said, people search for something to believe in. The first newspaper astrology column was commissioned in August, 1930, in the aftermath of the stock-market crash, for the British tabloid the Sunday Express. The occasion was Princess Margaret’s birth. “What the Stars Foretell for the New Princess” was so popular—and such a terrific distraction—that the paper made it a regular feature. After the financial collapse in 2008, Gordon, who runs a popular online astrology school, received calls from Wall Street bankers. “All of those structures that people had relied upon, 401(k)s and everything, started to fall apart,” she said. “That’s how a lot of people get into it. They’re, like, ‘What’s going on in my life? Nothing makes sense.’ ” Ten years later, more than retirement plans have fallen apart. “I think the 2016 election changed everything,” Colin Bedell, an astrologer whose online handle is Queer Cosmos, told me. “People were just, like, we need to come to some spiritual school of thought.” As Kelly put it, “In the Obama years, people liked astrology. In the Trump years, people need it.”"
Posted by Eric at 6:21 PM