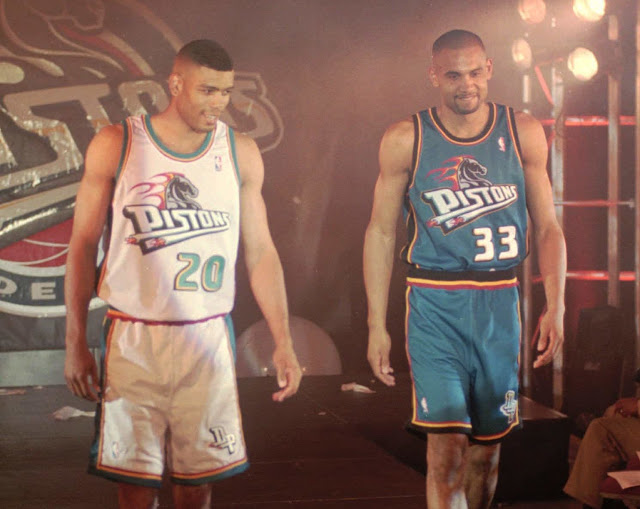 The Athletic – "A wacky oral history about the origin of the Pistons’ teal jersey, horse logo and Hooper"

"Tom O’Grady, NBA creative director in the 1990s: The Charlotte Hornets started it all. They were the leaders. Alexander Julian, the fashion designer, who was kind of an outsider in that category and in that business in 1988, came up with that concept, but that predated me — I wasn’t even there yet. But that was the one that really set the world on fire when it came to teal, and everybody else was an imitator. The Marlins, the Sharks and the Jaguars. The Grizzlies were turquoise, so the Grizzlies were not teal if you look at their color carefully. It’s a different shade altogether."

"O’Grady: I think the NBA made a big mistake. I think when Nike came on board, they started overthinking all this stuff and forgot that they’re in sports entertainment and worry too much about the precision of a backstory and a hype video and, you know, how they’re going to sell the merchandise and how they’re going to reduce the manual manufacturing costs. So, I think Nike screwed up about a 15-year era for NBA uniforms. I think everything is so bland and predictable and nothing that, you know, energized the eyes. Basketball, more than anything, is the most sports-entertainment brand on the planet. I mean, I felt like they were going into this intramural style for a sport that does not need that. That’s not who they are."
Posted by Eric at 1:10 AM