The 60th Anniversary of The Guggenheim 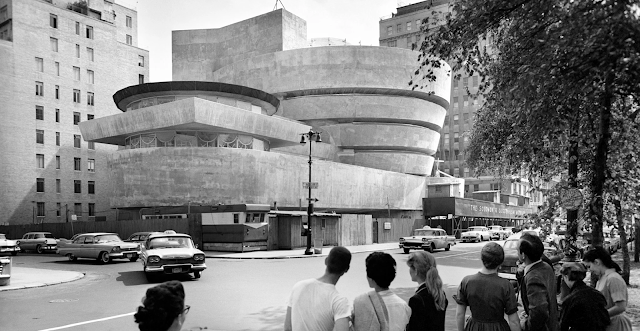 "Frank Lloyd Wright’s Solomon R. Guggenheim Museum is still a shock on Fifth Avenue. The architecture declines to fade into the background or get old, never mind the building turns 60 this month.

Happy birthday to one of modern architecture’s transcendent achievements! Its spiral ramp has defeated generations of curators trying to figure out how to install exhibitions on it. The building has gone through ham-fisted additions, hostile restorations, lousy paint jobs and too many bad imitations to count.

But it endures everything, a testament to what the critic Ada Louise Huxtable once called its “unified space and structure.”

Neither Wright nor the man who commissioned him to design the building, Solomon R. Guggenheim, saw it finished. Guggenheim had died a decade earlier, Wright shortly before the building opened. He was 91.

Then Guggenheim died. His nephew took over the project, and for years construction stalled because of rising costs and material shortages after the war. In addition, Wright’s design violated all sorts of New York building codes, so the Guggenheim couldn’t get a permit until Wright reached out for some help. Robert Moses, the city’s all-powerful planning czar, while he had no love for modern art or Wright’s architecture, was related to Wright by marriage. Magically, the museum got its permits."