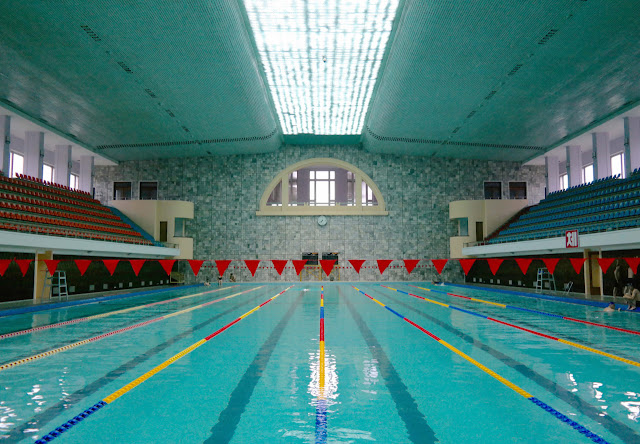 "When we peer into a lake, river or ocean, we find that water encourages a particular kind of reverie. Perhaps its depths can enhance our consciousness even more if instead of just looking, we get in and swim.

We jump into that water and find ourselves in a curious liminal space. Here we are, suspended, yet moving; floating, yet ever in danger of sinking. And if we swim with the current, instead of fighting against it, we find a momentary state, one of motion and yet paradoxical stillness that is flow.

The focused immediacy of swimming encourages a mind-set that reminds me of how my young children think: It’s an ever-presentness. Every past moment is immediately replaced by a new one: a constant stream of now, and now and now that doesn’t allow much room to dwell too long on things past or what’s to come. Living in the now is a state of being that my busy brain finds challenging — but I desire it. Swimming is an antidote for the existential anxiety from which I suffer.

In “Waterlog,” his celebrated chronicle of swimming through Britain’s waterways, the naturalist Roger Deakin described swimming as having a transformative, Alice-in-Wonderland quality; it was an activity that had power over his perception of self and of time. “When you enter the water, something like metamorphosis happens,” he wrote. “Leaving behind the land, you go through the looking-glass surface and enter a new world.” You’ve crossed a boundary, and the experience of life while swimming is intensely different from any other. Your sense of the present, he added, “is overwhelming.”

Cognitive scientists have shown that water sounds — the rhythmic hum of the ocean, the rush of a waterfall — are calming to the human brain. We experience a drop in heart rate and blood pressure and an increase in alpha-wave activity — those brain wavelengths associated with relaxation and boosted serotonin — as well as creative thinking. While tooling around on the Spotify music-streaming service one day, I found that white-noise water sounds are some of the biggest hits there; a track called “Rolling Ocean Waves” has been played nearly 60 million times.

Walks in the woods are all well and good, as Thoreau illustrated in his transcendentalist classic, “Walden.” But during the two years, two months and two days that he spent living in that cabin at Walden Pond, he also got up early every morning to swim; he described it as “a religious exercise, and one of the best things which I did.” Each of his swims stimulated body and mind. Each day’s routine of rousing early to do so was a way to enact his desire to “live deliberately” in the New England forest.

Much has been made of the walk as the instrument for big thinkers: Charles Darwin; Albert Einstein; Amos Tversky and Daniel Kahneman, who famously rambled together and revolutionized our understanding of the psychology of decision-making. Less has been explicitly made of swimming — a similar kind of aid, more medium than tool — for channeling the inner life and improving the flow of thoughts.

The physical action matters just as much as the environment does. “The way we move our bodies further changes the nature of our thoughts, and vice versa,” the science journalist Ferris Jabr notes in an essay titled “Why Walking Helps Us Think.” It follows that the pace of swimming, because of its fluid continuity, encourages a specific kind of thinking. There are the same changes to our body chemistry in swimming as there are in land exercise: faster heartbeat, increased circulation, more blood and oxygen to muscles and brain.

The marine biologist and author Wallace J. Nichols is an evangelist for achieving what he calls “blue mind,” which emphasizes the importance of drifting to discovery, and water as a way to enable that process. “Being around water provides a sensory-rich environment with enough ‘soft fascination’ to let our focused attention rest and the default-mode network to kick in,” he writes. In these times of stress and social distancing, he emphasizes that water is essential medicine more than ever."
Posted by Eric at 3:55 PM