The Future of Our Ocean 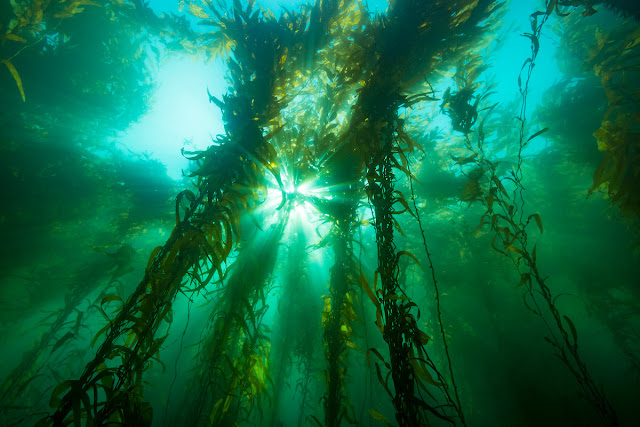 "Earth was not born with an ocean. Water arrived here from the cold depths of space with icy asteroids and comets, which bombarded the planet during the first few million years of its existence. It’s been a watery world ever since. Today, 97 percent of the Earth’s water is in the ocean, which covers more than 70 percent of the planet. The ocean was the petri dish for the creation of life, and we carry that early history within us. The salt content of our blood plasma is similar to the salt content of seawater. “The bones we use to hear with were once gill bones of sharks,” says Neil Shubin, professor of anatomy at the University of Chicago and author of Your Inner Fish: A Journey Into the 3.5 Billion-Year History of the Human Body. “Our hands are modified fish fins, and the genes that build our basic body architecture are shared with worms and fish.”

Despite our intimate connection to the sea, for most of human history the ocean has been as strange to us as a distant planet, a realm of monsters and mayhem. Humans stuck close to the shore, mostly, and our ignorance about the ocean was profound. It still is. Scientists have only a vague understanding of exactly how ocean currents are driven, or how ocean temperatures impact cloud formation, or what creatures thrive in the depths. Far more people have been to the moon, which is 240,000 miles above us, than have been to the deepest part of the ocean, which is seven miles down. Eighty percent of the ocean remains unmapped, unobserved, unexplored. Marine biologists don’t know how sharks sleep or an octopus learns to open a jar.

But scientists know enough to know that the ocean is in trouble. Largely because of overfishing, 90 percent of the large fish that were here in the 1950s are now gone. One metric ton of plastic enters the ocean every four seconds (at this rate, there will be more plastic than fish in the ocean by 2050). But the biggest problem, thanks largely to our insatiable appetite for fossil fuels, is that the ocean is heating up fast. The past five years have been the five warmest ever measured in the ocean, with 2019 the hottest ever. According to one study, the amount of heat being added to the ocean is equivalent to every person on the planet running 100 microwave ovens all day and night.

Monterey Bay is a crescent on the Northern California coast, a place haunted by the ghosts of John Steinbeck’s Cannery Row. The old sardine canneries are now T-shirt shops and touristy restaurants. From the pier, you can watch sea otters playing in the surf and, if you’re lucky, whales breeching just offshore. A deep canyon delivers cold, nutrient-rich waters into the bay, creating one of the most diverse ecosystems in the Pacific, including giant kelp beds that grow along the coast all the way up to Alaska. In good times, these kelp beds are teeming with life — otters, seals, sharks, rockfish, lingcod. “The kelp beds are the rainforests of the Pacific,” Kyle Van Houtan, the chief scientist at the Monterey Bay Aquarium, tells me.

But like everything in the ocean, the kelp beds are changing fast. On a recent Saturday morning, I pulled on scuba gear and jumped in the water near Monterey to have a look for myself. What I saw was not the rainforest of the Pacific. Instead, I was greeted with nothing but rock and water and hundreds of purple sea urchins, their thorny spikes like medieval armor. A voracious horde had invaded the once-magnificent kelp forest and devoured everything (“purple urchins are the cockroaches of the sea,” one scientist told me), leaving only some empty abalone shells, a rockfish poking around, and a few pathetic kelp stipes. And this spot is just one fragment of a bigger picture. As a result of the Blob, many of the kelp forests along the coast from California to Oregon have vanished, done in by warming and the army of purple sea urchins, which thrive in a hotter world.

Former NOAA director Jane Lubchenco says it’s time to stop thinking of the ocean as a victim of climate change and start thinking of it as a powerful part of the solution. A recent study that Lubchenco co-authored suggests that by developing renewable energy from the ocean, including tidal power and offshore wind farms, as well as eating more fish and less red meat and substituting kelp for traditional feeds for farm animals, as much as one-fifth of the carbon-emission reductions needed to hit the 1.5 C target could be found in the ocean. To Lubchenco, we have spent far too long focused on the problems and not enough on the solutions. “For the last few decades, the narrative about the ocean is that it’s too big to fix,” says Lubchenco. “Coral bleaching, gross plastic pollution, ocean acidification, heat waves, collapsing fisheries. It’s been one disaster after another. But now a new narrative is beginning to emerge, one that recognizes how central the oceans are to mitigating climate change, to adapting to climate change, to providing food security, to so many things that we care about. The new narrative is far more hopeful, and it says the ocean is too big to ignore.”"
Posted by Eric at 3:41 PM