The Last Dance to Premiere on April 19 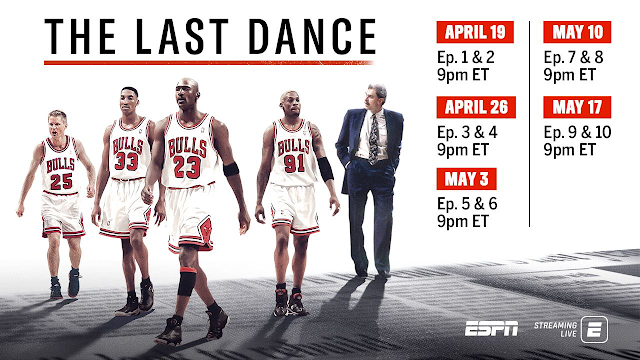 ESPN - "Michael Jordan series on ESPN, 'The Last Dance,' moved up to April"

""The Last Dance" takes an in-depth look at the the Chicago Bulls' dynasty through the lens of the final championship season in 1997-98. The Bulls allowed an NBA Entertainment crew to follow them around for that entire season, and some of that never-before-seen footage will be in the documentary.

In addition, ESPN spoke to more than 100 people close to the team and personalities who experienced the run, exploring all angles of the Jordan phenomenon.

Many consider Jordan to be the greatest basketball player of all time. He won six titles with Chicago in two separate three-peats. He played 15 seasons in the league, and the only year he wasn't an All-Star was the partial season, when he returned from a hiatus playing minor league baseball. He won the scoring title a record 10 times, was the league MVP five times and Finals MVP a record six times."
Posted by Eric at 1:32 PM